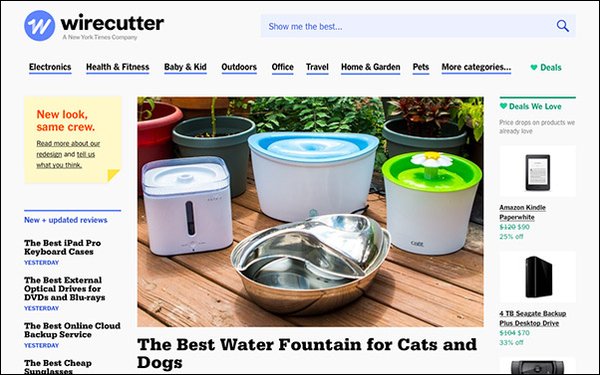 The new Wirecutter has officially launched today, combining The New York Times Co.’s two recommendations sites: The Wirecutter and The Sweethome, to feature reviews on a wider variety of categories under one brand.

Stories on the homepage, for example, include “The Best Water Fountain for Cats and Dogs” and “The Best Infant Car Seat.”

The Wirecutter site now has a new logo, colors and fonts, and a mobile-first user experience, as well as a single column design and more emphasis on deals for recommended products.

“Since The Wirecutter was founded in 2011 and TheSweethome in 2013, we haven’t wavered from our mission to help people effortlessly choose and buy the stuff they need in order to live a better life. Up until recently, we’ve carried out that mission on two separate sites primarily covering tech and home. That’s changing today,” wrote Jacqui Cheng, editor-in-chief of Wirecutter, and executive editors Mike Berk, Dan Koeppel and Ganda Suthivarakom, in a site post announcing the redesign.

“As we’ve grown over the last few years, we have expanded our coverage to encompass things beyond TVs, laptops, printers, headphones and kitchen appliances. We’ve been feverishly adding coverage on outdoor gear, smart-home devices, home furniture, and stuff for parents (of both children and pets),” they added.

The rebrand was first announced in September. The two sites were acquired by NYTCO for more than $30 million last year, as a bid to supplement other revenues streams, such as subscriptions and advertising.

Wirecutter makes money by recommending products and embedding links for readers to buy those products on e-commerce sites like Amazon. It takes a cut once a reader completes a purchase.

Since last October, The Wirecutter has nearly doubled its staff and grown the number of product recommendations by 40%. It has also collaborated with the NYT, combining product reviews with service journalism, such as “Children’s Headphones May Cause Risk of Hearing Loss” and “5 Cheap(ish) Things That Could Disproportionately Improve Your Life.”