How NOT To Simplify Your Agency Comp To Reduce Costs 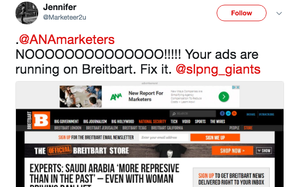 The good news: The Association of National Advertisers practices what it preaches in a new ad campaign promoting a report promising to simplify “agency compensation to reduce costs.”

The bad news: The ANA should have paid for better ad agency stewardship of the programmatic ad buy, which showed up on top of the “National Security” page of inflammatory alt-rght news site Breitbart.com.

The ad, which was part of a programmatic buy placed by performance agency Path Interactive, was quickly pulled after @Marketeer2u spotted it and tweeted a screenshot of the placement, commenting, “NOOOOOOOOOOOOOO!!!!! Your ads are running on Breitbart. Fix it.”

The incident, which was first reported in the trade press by Adage.com late last week, underscores the slippery slope of digital media-buying transparency that the ANA, ironically, has been championing.

The point of today’s RTBlog isn’t to further rub the ANA’s noses in the incident, but to point out that stewardship is -- and always has been -- a key component of agency media-buying services, before, during and after the shift to programmatic digital media-buying. If anything, programmatic makes it more imperative.

In the old days, it was sufficient for agencies to issue blacklists, check broadcast schedules for discrepancies, pull tear sheets and ride the boards, but in the era of programmatic media buying, they need to go a few steps further to develop protocols and procedures to ensure that a brand’s message doesn’t show up in an environment that isn’t just “unsafe” -- but, as this incident illustrates, actually contradicts what the brand has been saying. 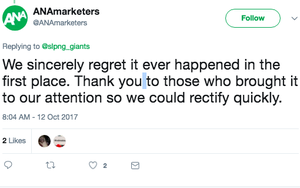 media buying, programmatic
4 comments about "How NOT To Simplify Your Agency Comp To Reduce Costs".
Check to receive email when comments are posted.
Read more comments >
Next story loading