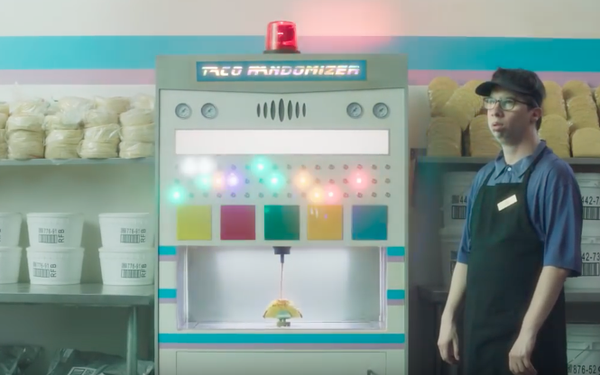 Since late September, Carl’s Jr. and Hardee’s have been trolling various fast-food competitors with humorous videos and TV spots, in a campaign promoting their $5 All Star Meals. It’s the first national value-meal promotion for both QSR brands.

The videos have taken on the big guys in the burger, sandwich, and other QSR segments, as well as convenience store fare, without calling out their names — contrasting the food and beverage offerings in the “real” All Star Meals with choices like “playing dollar-menu bingo” or buying “9.6 inches of sandwich.”

The latest target: an unnamed Mexican chain that, the video (below) imagines, uses a “Taco Randomizer” machine to combine the same four ingredients into a slew of different physical formats.

The message: “If you’re hungry and you’ve got five bucks, you could eat this stuff that the meat, bean, cheese randomizer ‘quieroed’ into a box, or you can get a real meal…”

This time, the video was accompanied by a social promotion in which consumers were invited, on Nov. 2, to ask “random” questions of the Taco Randomizer on the Hardees and Carl’s Jr. Twitter channels, using #AskRandomizer.

Fans responded with a vengeance, submitting a raft of inappropriate, absurd and/or existential queries.

In another recent twist, Carl’s Jr. and Hardees have been posting short videos in which ostensibly confused comedian Kurt Braunohler goes on location, comparing food from a “subway” (a real New York subway, that is) and “BK” (actually, a BK Pilates studio) with the All Star Meals.

The campaign is from 72andSunny, the two QSR brands’ creative agency of record.