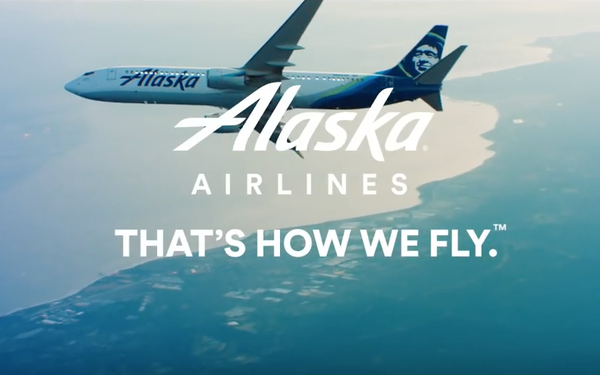 Post-merger with Virgin Airlines, Alaska Airlines is challenging consumer perceptions of the airline and targetting Californians.

Each component of the campaign is designed to resolve a misconception many people have about the airline. “That’s how we fly” reminds flyers that Alaska Airlines goes to more destinations than just Alaska —  it actually connects the West Coast to the world with more than 1,200 daily flights and its global partner network.

“This is the first time Alaska Airlines has run a brand campaign on TV in California,” Natalie Bowman, managing director of marketing and advertising at Alaska Airlines, tells Marketing Daily. “We are introducing ourselves to a market that doesn’t know us very well.”

The brand is targeting California leisure and business travelers who appreciate brands that combine low fares with premium service, she says.

“The objective is to become the preferred airline in the Bay Area,” Bowman says.

“FOMO No Mo” and “Power Move” showcase how in-seat power and free text/messaging shouldn’t be reserved for those flyers with status. Finding inexpensive airfare shouldn’t mean your flight can’t be affordable and enjoyable. “From San Diego On Up” focuses on California travel and “Glocal” talks about the airline’s global partners with local charm.

“When Californians hear Alaska Airlines they automatically think lumberjacks and glaciers,” says Tommy Means, Mekanism founder and executive creative director. “So we thought let's have fun with that, because we also fly really interesting people to interesting places. By showing app developers, novelists and pilates instructors flying to unexpected places, we are able to create a fresh narrative for Alaska.”

The work cuts through the category by showing an unexpected cast of characters seamlessly stepping into colorful and stylized worlds, juxtaposed with a relatable and friendly narrator, he says.

The media plan will enable Alaska to present itself as a top-five national carrier, says James Monderine, associate director, media strategy at Haworth Marketing and Media.

“We designed a presence that would be big and confident,” Monderine says. “The video-led, multi-channel campaign will do this in California, Washington and Oregon with a robust mix of TV, print, digital (mobile & desktop), social and OOH.”