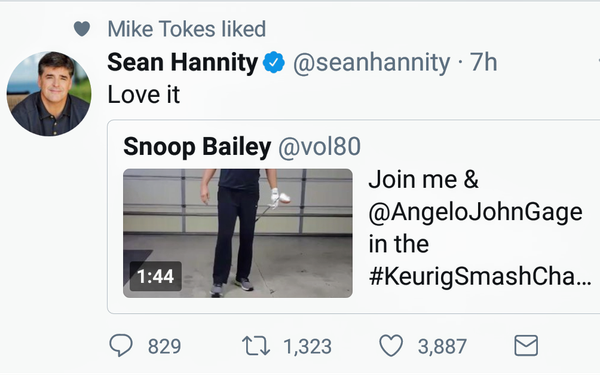 In an unusual -- maybe even unprecedented -- move, Fox News personality Sean Hannity is rallying his fans to attack a brand that dropped support for his show.

In a series of tweets, Hannity has been encouraging and applauding fans who are sharing tweets, social media posts and videos trashing and even smashing Keurig coffee makers in retribution for Keurig dropping its sponsorship of Hannity’s show. That happened after the talk-show host broadcast a segment appearing to support Republican Senate candidate Roy Moore, following reports that he engaged in sexual activities with underage girls.

Using hashtags #BoycottKeurig or #SmashYourKeurig, Hannity has been retweeing and commenting on the reverse boycott of a former brand sponsor of his show.

Hannity has also mounted a campaign against left-leaning media watchdog group Media Matters for America, which has been promoting the consumer brand boycott against Hannity for supporting Moore following the allegations.