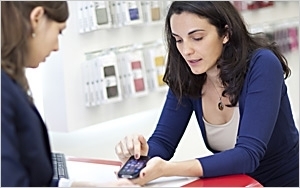 Cell phone manufacturers have job security, it would appear.

Nearly two-thirds of consumers still replace their phones every two years, despite the lack of device subsidies, according to Deloitte.

With nearly 264 million Americans using their mobile phones 12 billion times per day, in the aggregate, the mobile ecosystem remains one of the most important enablers of the way we live and work in 2017, according to Deloitte.

This year, smartphone penetration reached 82% overall with ages 18-24 having the highest penetration at a staggering 93%. In fact, the strongest growth in ownership for two years running now is among those aged 55 and older.

Eighty-nine percent of consumers looked at their phones within an hour of waking up, a yearly increase of 1%. Similarly, 81% of those surveyed look at their phones an hour before going to sleep, consistent with 2016. Almost half (47%) of U.S. consumers are making a conscious effort to reduce or limit their smartphone usage, mostly by keeping it out of sight or turning its functions off.

Wearables are becoming mainstream for millennials, as 35% of 25-34 year olds say they use fitness bands, 30% use smart watches and 20% virtual reality headsets.

Smartphone usage and growth rates for both devices and apps have matured after years of robust growth, and most Americans not only own smartphones but are fairly consistent in the way they use them. Conversely, what is growing is consumer interest in a range of exciting “internet of things” related applications and services and the industry has done a strong job of keeping consumer interest high in the potential of internet of things and fifth-generation networks (5G), as well as unlimited data plans and device upgrades.

While consumers may have reservations about privacy as it relates to the emerging internet of things platforms, they are showing very few reservations about sharing personal data when entering into agreements or making purchases online.

The “2017 Global Mobile Consumer Survey” covers six continents, 32 countries and more than 51,000 respondents. In addition to exploring year-over-year results and key insights, the survey is also designed to highlight differences between consumers across generational divides — capturing findings from six distinct age groups from ages 18 to 75.