Subaru Unveils Ascent SUV With Help From The Barkleys 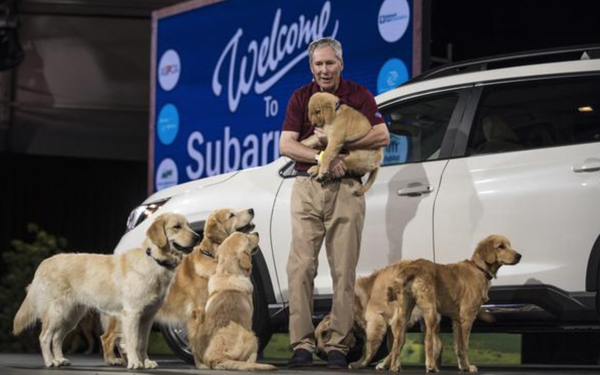 LOS ANGELES — In what might be the most adorable-ever vehicle reveal, Subaru of America enlisted a family of eight Labrador and Golden Retrievers to help debut its 2019 Ascent SUV at a press event prior to the Los Angeles Auto Show.

The Barkleys, previously featured in Subaru ad campaigns, appeared to be driving the Ascent as it entered the stage Tuesday night. The dogs exited the vehicle to greet Tom Doll, president and chief operating officer of Subaru of America and pose for photos.

The three-row SUV, exclusive to the United States, will be built in Lafayette, Ind., and go on sale in next summer. It is the biggest Subaru to be brought to market.

“The big question with the Ascent is whether or not Subaru buyers are finally ready to embrace a large SUV,” says Jessica Caldwell, executive director of industry analysis for Edmunds. “Subaru has come a long way from its days as a quirky niche brand, so the Ascent has a much better chance of success.”

Dogs are a major pillar for the automaker as more than half of Subaru drivers are pet owners, with over 48% of them owning at least one dog. For years, Subaru has supported various pet-focused organizations that help to improve the lives of our four-legged friends and features dogs throughout their advertising.

The Barkleys will be featured in Ascent advertising when it breaks next year, Doll said.

Subaru has seen 71 consecutive months of record sales fueled by high conquest rates supplementing its loyal owner base. Subaru looks to continue the trend with the Ascent.

Hyundai is unveiling the U.S.-production version of its Kona crossover. For those unable to attend the show, a live stream of the press conference will be available on YouTube at 5:30 p.m. Eastern.

“One of the biggest stories will center on Jeep’s all-new 2018 Wrangler, an iconic model with a dedicated fan base,” Brauer says. “World debuts from luxury brands will remind everyone that premium cars with high margins are critical to every global automakers’ business plan, especially in growing markets like China and the Middle East.”