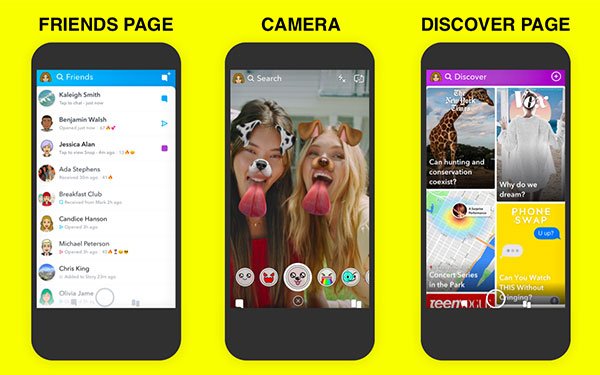 Along with some subtle stylistic tweaks, the biggest changes include the removal of the app’s Stories page, and a clear line between personal communications and media.

As Spiegel explained, the new division is a reaction to negative trends in the social media space, like the spreading of “fake news” and inauthentic self presentation.

“While blurring the lines between professional content creators and your friends has been an interesting Internet experiment, it has also produced some strange side effects (like fake news) and made us feel like we have to perform for our friends rather than just express ourselves,” Stories notes in a blog post.

“The new Snapchat separates the social from the media,” Spiegel said. “This means that the Chats and Stories from your friends are on the left side of Snapchat, and the Stories from publishers, creators and the community are on the right.”

The redesign also includes a “dynamic Friends page,” which can be found to the left of the camera. It displays users’ friends based on their communication preferences.

Additionally, a new Discover page -- to the right of the camera -- includes Stories from publishers, creators, and the community.

Users’ subscriptions live at the top of this page, followed by other Stories they might be interested in watching. Over time, Discover will become personalized for users, according to Spiegel.

“While the Stories on Discover are personalized algorithmically, our curators review and approve everything that gets promoted on the page,” he said.

The changes come at a critical time for Snap. Earlier this month, the social communications platform reported its third consecutive losing quarter. During the period, it racked up revenue of just $208 million -- a net loss of $443 million -- and, worst of all, only 4.5 million new daily active users.

Earlier this month, Spiegel warned the redesign likely wouldn’t fix Snap’s problems overnight. “There is a strong likelihood the redesign of our application will be disruptive to our business in the short term,” the young CEO said.

Some analysts have suggested that Snap could simply be suffering from unfair comparisons to Facebook.

“My optimistic side likes to think that the past three quarters since Snap’s IPO are helping to set expectations regarding reasonable growth rates for new advertising-driven businesses -- expectations that have been thrown for a loop due to Facebook's unprecedented success,” Forrester analyst Melissa Parrish recently told Digital News Daily.

This past quarter, Snap blamed revenue deceleration on an increased reliance on programmatic ad sales. In fact, 80% of impressions were delivered programmatically in the third quarter -- up from zero last year.

Snap said this caused advertisers to shift from direct sales to unreserved auctions, which reduced CPM-based pricing by about 60%, year-over-year. “It makes perfect sense that moving to an auction-based environment would drive down CPMs, and the extent to which that will happen is hard to predict,” Parrish said.

“When faced with the opportunity to include Snap in brand campaign recommendations, we’re finding most often it’s smarter and easier to recommend Instagram," he added. "From a targeting and analytics standpoint, as well as overall market trends, Instagram can deliver the same audience in a more stable, predictable way.”