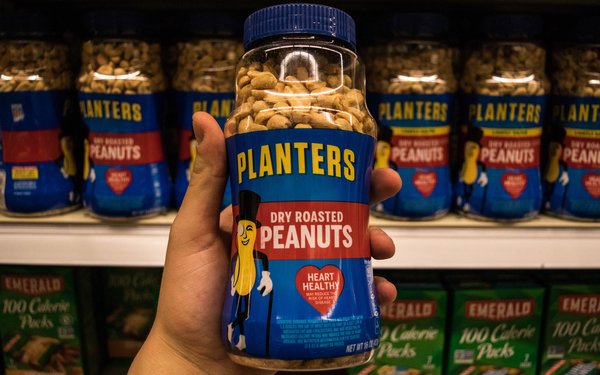 Kraft Heinz Company has appointed mcgarrybowen, part of Dentsu Aegis Network, as the new creative AOR for its Planters brand. The appointment was confirmed by the agency.

While the agency declines to discuss strategy, the creative will likely continue to feature Mr. Peanut, the nut brand's mascot since 1916. The CGI-character has been voiced by Robert Downey Jr. and, most recently, by comedian Bill Hader.

Mcgarrybowen is tasked with boosting sales of a well-known brand during a time of disruption. Planters still relies heavily on traditional media, such as TV and print, while increasingly extending its focus towards digital.

Kraft Heinz spent $27 million on advertising for Planters during the first six months of 2017 and $41 million in 2016, according to Kantar Media.  The food conglomerate also is upping its focus on product extensions, specifically the Planters Signature nutrition line.

For its part, Kraft Heinz is undergoing significant reorganization as it adjusts to the changing retail landscape, including promoting Nina Barton, current head of U.S. market, innovation and R&D to the new role of president, global online and digital growth initiatives. In this new role, Barton is responsible for leading all Kraft Heinz e-commerce platforms, accelerating digital transformation, and driving new online business.