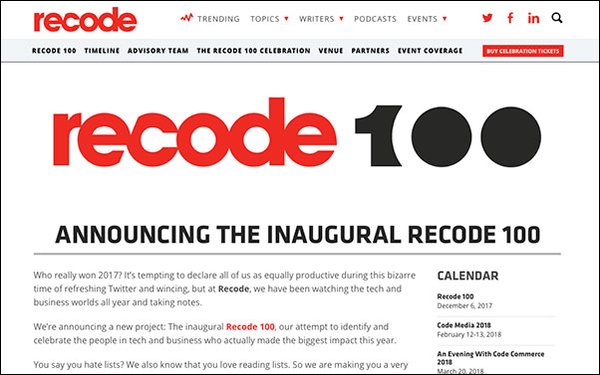 This week, tech news site Recode released its first "Recode 100," an annual list of the 100 people who made the biggest impact in the tech, business and media industries.

Recode set up an advisory team to work alongside its editors to vet public submissions, as well as nominate and help rank their peers. The pub also used data analysis to minimize conflicts of interests, so that nobody could just nominate their friends.

"Recode 100" is just one of many franchises the tech site is looking to create. In 2018, Frommer hopes to expand the coverage of Recode beyond Silicon Valley. He's looking at innovation in China and Europe, for example.

In May, Recode ditched the slash from its name, and Frommer suggested the new logo was a sign of changes at the site.

Frommer, who was tapped as editor of the site in March after working at publications like Forbes, Quartz and Business Insider, wants Recode to be more global and “approachable by any reader,” not just those in the industries it covers.

He also doesn’t want to cover “just small breaking news,” but rather to focus on “deep reporting” by “pulling back, zooming out and writing the bigger story.”

In May, Recode hired Teddy Schleifer to “aggressively … follow the money in Silicon Valley, covering capital, power and influence,” Frommer said at the time -- and to tell the stories "behind big investments, fast-rising startups and executives...long before there’s a press release or cover-up."

The hope is to build franchises that can expand to conferences and events, Frommer added.

Recode is the one of the few brands that belong to Vox -- which acquired the company in 2015 -- that relies on its conferences, such as its Code Media and Code Commerce events, for revenue.

“We rely the least on advertising,” Frommer noted.

A self-described “charts guy,” Frommer said Recode is developing its data journalism capabilities too. In March, Rani Molla was hired as the publication’s first data editor to determine how to integrate code, data, polls, graphics and data visualization in Recode's reporting.

Is there one beat Frommer doesn't expect Recode to cover? The goings-on in Washington, D.C.

“Politics was not part of my growth plan,” he said. But in March, Frommer hired Tony Romm as senior editor, policy and politics. Romm was previously senior tech reporter at Politico.

Recode has about 15 editorial employees based in New York and San Francisco.