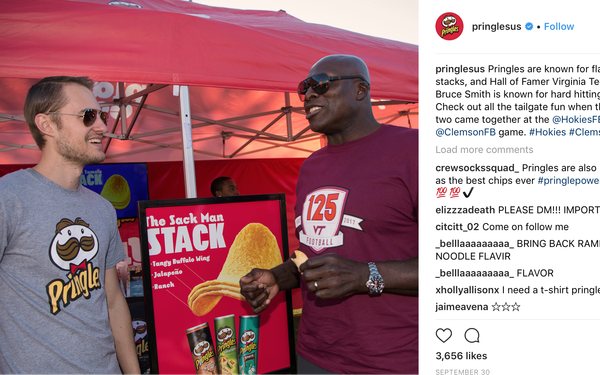 Pringles will advertise for the first time during next year’s Super Bowl on Feb. 4.

With an estimated 11.2 million pounds of chips consumed on game day, Pringles plans to introduce viewers to a new way to enjoy their Pringles: "flavor stacking."

Each stack is made with a variety of Pringles' flavor combinations. For example, fans can combine cheddar cheese with sour cream and onion chips along with  jalapeño crisps to create the “Hot Tamale Stack.” The concept harkens back to several decades go when Jelly Belly began putting out “recipes” that consumers could use to combine different beans to create different flavors in their mouths.

The spot, created by Grey Group, kicks off a Pringles campaign that will run throughout 2018. The integrated marketing campaign includes PR, digital and social media.

"'Flavor Stacking' Pringles is one of those things that seems so stupidly obvious in hindsight,” said Brian Platt, group creative director of Grey Group New York, in a release. “But relatively few people have thought to do it. We've harnessed the incredulous reactions after people are introduced to 'Flavor Stacking' in an entertaining and hilarious spot.”

Super Bowl weekend is a historically strong weekend for the Pringles brand, with in-store dollar and unit sales well above normal levels, according to the company.  Last year's Super Bowl weekend was the fourth-highest weekend in sales for the brand, falling just behind other historically salty snack-oriented weekends such as July 4th and Memorial Day.

"The Pringles Super Bowl advertisement is an opportunity to show people a fun, new way to enjoy their favorite Pringles flavors with their family and friends,” said Yuvraj Arora, senior vice president of marketing for Kellogg's U.S. Snacks division, in a release. “Whether there are four people at home or 30 people at your party, this idea's 'now why didn't I think of that?' spirit brings a whole new way to snack during the big game this year.”