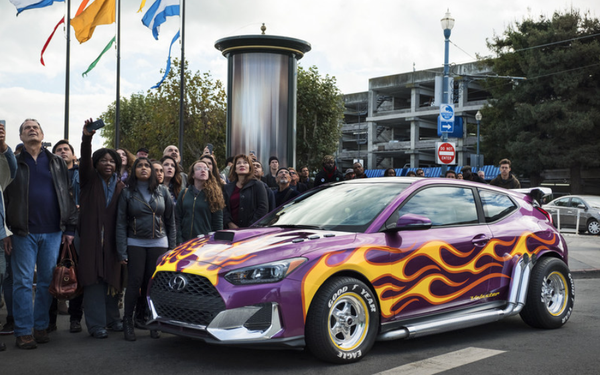 Hyundai has re-upped its deal with Marvel Studios as evidenced by signage at the Detroit auto show, which opens to the public this Saturday.

The automaker initially entered a two-year deal with Marvel and Netflix in 2015 that gave it product-placement rights with hero franchises “Daredevil” and “Jessica Jones,” “LukeCage” and “IronFist.” The partnership culminated in 2017 when the four heroes joined together as “The Defenders” in another new series.

A display at the auto show shows the Hyundai Veloster will be featured in “Ant-Man and the Wasp,” which will be in theaters July 6.

“Teaming up with this major franchise is part of a global marketing initiative to launch the newly redesigned sporty coupe while increasing Hyundai's brand awareness with Marvel fans around the world,” the automaker said in a statement.

Other Hyundai vehicles also will make their Hollywood debut in the movie, according to the automaker.

The auto show display features a purple Veloster covered in yellow and orange flames in a city scene where people gathered around the car are looking up into the sky with surprised facial expressions.

The display describes the movie’s premise: “From the Marvel Cinematic Universe comes a new chapter featuring heroes with the astonishing ability to shrink. In the aftermath of ‘Captain America: Civil War,’ Scott Lang (Paul Rudd) grapples with the consequences of his choices as both a Super Hero and a father.

“As he struggles to rebalance his home life with his responsibilities as as Ant-Man, he’s confronted by Hope van Dyne (Evangeline Lilly) and Dr. Hank Pym (Michael Douglas) with an urgent new mission. Scott must once again put on the suit and learn to fight alongside The Wasp as the team works together to uncover secrets from their past.”

Also at a press preview Monday at the North American International Auto Show, Hyundai unveiled the 2019 Veloster Turbo and its high-performance counterpart, Veloster N. As part of the reveal, Hyundai also announced that both cars will join the official roster of drivable vehicles in Forza Motorsport 7 for Xbox and Windows 10.