Sponsorship Spending Expected To Rise In 2018 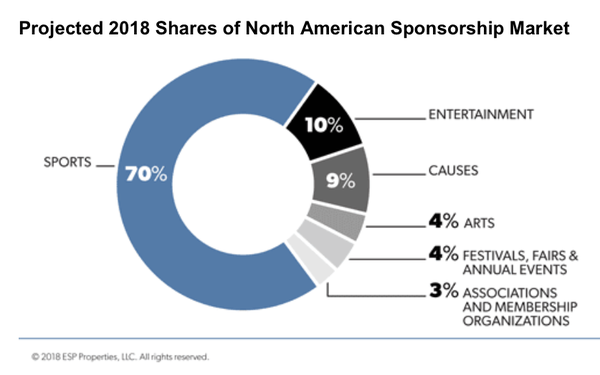 Brands are likely to amp up their sponsorship spends this year in the U.S. after a tighter-than-expected market in 2017, according to ESP Properties.

In its 33rd annual year-end industry review, the WPP-owned agency is forecasting a rebound this year in North America (which last year increased its spending by 3.6% to $23.1 billion), along with continued steady growth globally. While estimated spending in other regions of the world met projections, the smaller increase in the world’s largest sponsorship market dragged worldwide growth down to 4.3% and a total of $62.7 billion.

Despite lingering concerns over national and geopolitical matters, improving sales outlooks and overall economic indicators indicate higher corporate confidence heading into 2018, which should see brands more willing to spend on marketing, advertising and sponsorship. With that in mind, sponsorship spending is projected to grow 4.5% in North America this year — to $24.2 billion — and 4.9% globally, to $65.8 billion.

“While we are bullish that sponsorship will see healthier spending growth this year compared to last, it is still important to note that the organizations that will succeed in claiming their share of that spending will be those that offer relevant benefits to their partners in this era of digital and social media and who demonstrate understanding of their partners’ business goals and objectives in forging partnerships that are win-win,” said the report’s author, ESP senior vice president Jim Andrews, in a release.

A similar outlook is expected across the broader marketing spectrum, according to the “This Year Next Year” worldwide media and marketing forecast produced by ESP parent organization GroupM — the global media investment management company of WPP Group.

While 2017 growth rates for advertising and other forms of marketing — including public relations, direct marketing and promotions — were just above 2% in North America and 3% globally, both are expected to rebound by about percentage point or more this year.

In North America, all six property types should see significantly higher sponsorship growth in 2018 versus 2017. In what has become a familiar pattern, growth rates are expected to correlate to size, with the largest segment, sports, once again commanding 70% of the market and the highest projected spending increase at 4.9%.