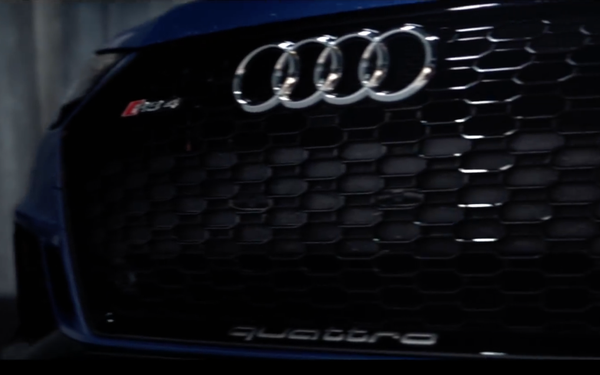 There is no driving to be found in the 60-second spot. Instead of showing the expected imagery of the vehicle hugging the curves on a windy road and accelerating in a straightaway, the spot from BBH London, “Cooling Down,” shows an Audi doing just that — cooling off after racing.

The camera pans around the car resting in a trackside garage after a race. Its engine is off, yet the evocative sounds of its cooling process give a tangible sense of the car's power and grace as its brake pads sizzle, its exhaust glistens, and its engine fan hisses, according to the automaker.

"The RS 4 is an Audi icon, combining the performance of a sports car with everyday usability,” says Benjamin Braun, marketing director of Audi UK, in a release. “Its new engine allows it to sprint from 0 to 62 mph in just 4.1 seconds and can potentially reach up to 174 mph.”

There’s also no music, just the car itself, stationary, cooling after racing. Featuring just the ambient noise of the engine, “Cooling Down” is the first Audi ad in many years to have no soundtrack or music. The camera pans from the racetrack to around the car.

The spot is “a brutally simple product demo designed to cut through the clutter of complicated comms in an ad-break,” says Ian Heartfield, executive creative director of creative agency BBH.

The ad will run on TV and in cinemas utilizing Dolby ATMOS 3D sound to amplify the ambient noise of the engine. The campaign will be complemented by digital and static billboards, as well as social and online video activity. The campaign was planned and bought by Omnicom Media Group’s PHD.