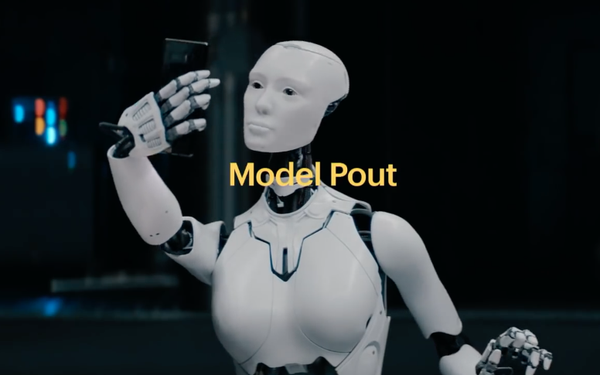 Figuring out what wireless carrier to use shouldn’t require a degree in advanced robotics, but it may require some artificial intelligence.

For its Super Bowl entry, Sprint is introducing “Evelyn,” a highly intelligent robot that determines — in a world of general network parity — that the less expensive choice is a better option. It’s the same message Sprint has been using for the past six months, but with an AI-twist.

“The message is just so simple and clear that it’s a really smart choice to choose Sprint,” Sprint Advertising Director Stacey Shupert tells Marketing Daily. “Using artificial intelligence to express that is simple and engaging.”

Evelyn will make her television debut during the first-quarter, 60-second spot, which depicts her learning more and more complex tasks (like playing chess) to the point of questioning her creator's choice of wireless carrier (Verizon). Eventually, the creator becomes the laughingstock of his AI-filled “office.”  In the run-up to the game, Sprint has also released a series of teaser spots that show Evelyn learning human behaviors and interests (like football and how to take brunch pics and selfies).

“We're pretty sure robots won't suffer from the same apathy and confusion people face when it comes to understanding wireless companies,’ said David Droga, creative chairman and founder of agency Droga5, in a statement. “And, as spokespeople, robots get to set on time, too.”

Though the Super Bowl campaign focuses heavily on the new AI-character, Paul (a.k.a. the former Verizon guy) continues his role as the new Sprint brand champion in the spot, and will continue to be featured in advertising following the Super Bowl, Shupert says.

“Paul is our number one customer, and that’s what he’ll continue to be,” Shupert says. She wouldn’t say whether the AI-bot Evelyn will continue to be a character in upcoming campaigns. “We’re focusing on the Super Bowl for now, and not thinking beyond that with Evelyn and Paul.”