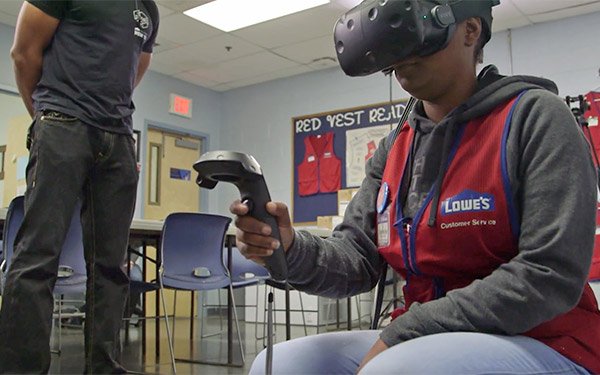 Retailers are finding new ways to use virtual reality.

While convincing consumers to use VR headsets for shopping may not exactly be mainstream, one retailer is extending shopper use of VR to employees.

The latest example is from Lowe’s, which is using virtual reality to train employees in an extension of its Holoroom How To program created by Lowe’s Innovation Lab.

Last year, Lowe’s launched in-store, VR-based skills training clinics in several stores. The aim of the Holoroom How To program was to teach customers basic do-it-yourself skills, such as supplies needed for a project and steps to complete one.

Lowe’s found that customers have about a 40% greater retention of steps to complete a project when using the virtual reality training.

Now Lowe’s is expanding that program with a new iteration to show associates how to use specific in-store equipment.

More than 400 employees have tested the VR platform and more than 90% have reported that the VR training would help them better serve customers, according to a statement from Lowe’s.

It’s not like virtual reality has moved to the head of the consumer electronics marketplace.

For example, one study last year by Global Web Index found that only 5% of Internet users in North America had a VR headset.  At a recent Walmart trip, I saw stacks and stacks of phone-based VR headsets marked down to $1 each. Hardly flying off the shelves.

While most consumers at home may not yet be attuned to the various wonders of virtual reality, some may start to learn about them at work.