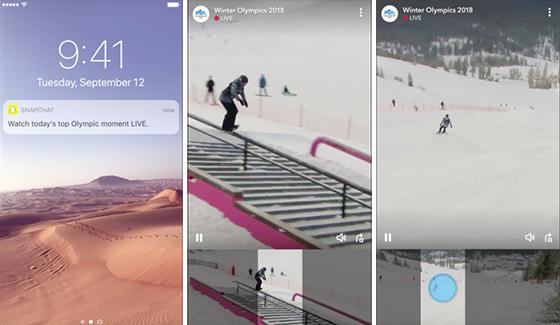 First out of the gate, NBC plans to use Live to serve up some of its live Winter Olympics coverage.

The partnership is a no-brainer, considering that NBCUniversal previously invested $500 million in Snap, and the network is aiming for kaleidoscopic coverage of the Games in South Korea.

In some much-needed good news for Snap, the messaging giant said on Wednesday that it added more users than expected during the fourth quarter of 2017. From the third quarter of the year to the fourth, Snap’s flagship Snapchat app increased daily active users (DAUs) from 178 million to 187 million.

“Snap’s revenue growth seems to have caught Wall Street by surprise, but it is consistent with overall digital advertising growth (and specifically social advertising). Q4 is historically the strongest quarter for advertising, due to the holidays,” said Forrester analyst Jessica Liu.

Along with some subtle stylistic tweaks, the biggest changes include the removal of the app’s Stories page and a clear line between personal communications and media.

Analysts like Liu are still not sold on the redesign.

“It runs counter to why Snapchat was appealing to its younger demographic in the first place. I worry it will alienate that existing user base because they’re now trying to cater to the masses [and Wall Street],” she said.