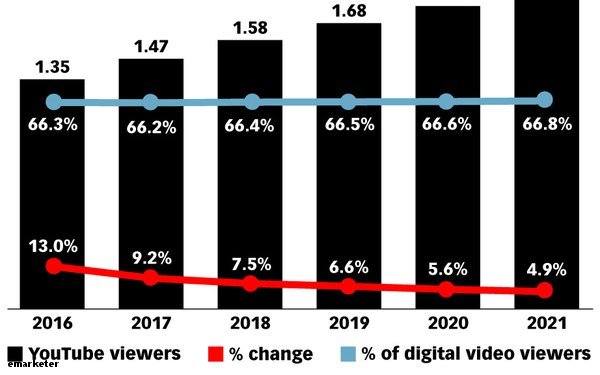 However, it isn’t just the usual suspects driving video growth. “Video’s proliferation on social networks and the growth of over-the-top (OTT) streaming platforms are major drivers of digital video viewing worldwide,” says Oscar Orozco, senior forecasting analyst at eMarketer. “However, an understated driver of video viewing is the use of chat apps.

"We forecast that close to 55% of internet users will be active on chat apps by the end of 2018," he continues. "Watching and sharing digital videos is a major feature on chat apps like Facebook Messenger, WhatsApp and WeChat, and for many internet users, it’s their first experience with digital video. We expect this will continue to be a significant driver of mobile video consumption.”

EMarketer's report also digs into global viewership for YouTube, the largest free video platform. The company estimates that this year 1.58 billion people will watch at least one YouTube video in a given month, a 7.5% increase from last year.

However, eMarketer’s report cautions that “YouTube viewership is nearing saturation in many markets,” with its growth just keeping pace with overall  digital video growth. Since it launched in 2005, YouTube’s growth has typically outpaced overall digital video growth. EMarketer estimates than in 2016 the site grew 13% year over year, and in 2017 it grew 9.2%.

EMarketer projects YouTube’s growth to slow by about 1% each year through 2021, “with YouTube user growth primarily coming from first-time digital video viewers.”