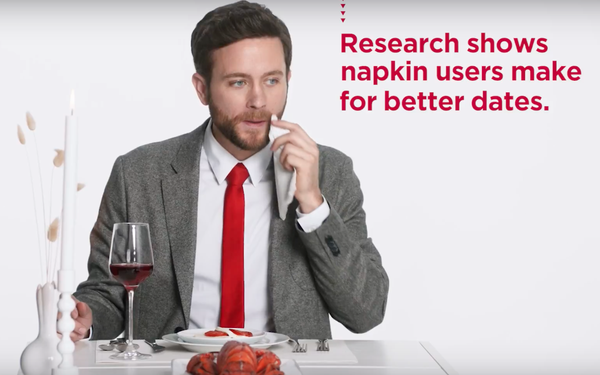 For those still looking for dates this Valentine’s Day, Georgia-Pacific’s Vanity Fair brand has some advice: pick a napkin user.

The company this week is launching a campaign pointing out that napkin users are more likely to be more attentive in dating situations than people who don’t use napkins. The campaign is based on research the company conducted after initially discovering napkin users were viewed as more civil — and therefore more dateable — than non-napkin users, says Jeff Scardino, creative director at Figliulo & Partners, the agency that created the campaign.

“It seems random on the surface, but when we were digging into the initial strategy, we started to see people who bought and used proper napkins also had other qualities about them,” Scardino tells Marketing Daily. “We wanted to prove it [about dating, too] — and not just generally say it — and the results were better than we had hoped for.”

Corresponding to its initial launch campaign late last year, the brand conducted research into relationship-specific qualities from the likelihood of watching bad TV (70% more likely) to getting along with your mother (54%) more likely. The agency turned these findings into short online videos and out-of-home ads for its “Date a napkin user” campaign.

One video depicts a couple out on a date that doesn’t appear to be going well. The couple seems bored and distracted, and not generally connecting. As they awkwardly eat a meal, the man uses a napkin to dab his mouth, eliciting an interested eyebrow-raise from the woman. (Text reads: “Research shows napkin users make for better dates.”) Other spots reveal that napkin users are more likely to join in a juice cleanse and the aforementioned mother likability.

The campaign will be running in online video, out-of-home and in display and social channels (where influencers will be encouraged to use the hashtag #DateaNapkinUser). Vanity Fair teamed with dating site Match to conduct the research, and the two companies will be hosting a singles event in Dallas (ranked as one of the worst dating sites in the U.S.) next week.

The entire “Date a Napkin User” idea is timed to Valentine’s Day to take advantage of those who might still be looking for that someone special, and wondering what qualities might point them in the right direction, Scardino says.

“When we thought about when to launch it, it makes sense to do it when dating was more topical,” he says. “We wanted to tap that nerve of people who are sick of dating.”