Musicbed Calls Out Creatives By Name In Campaign Ads 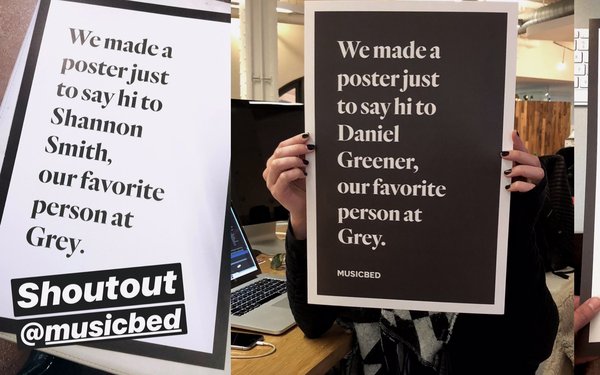 For its first major ad campaign, Musicbed is naming names.

In so doing it has launched a highly-targeted campaign to make advertising agencies - some of the biggest licensors of music - aware of its music licensing platform.

"Our artists’ music is currently used in advertisement and video projects all across the globe, but the Musicbed brand isn’t recognized by a lot of creatives," explains a company spokesperson. "We wanted them to see that we understand their work. They’re constantly pursuing ideas that cut through noise, get attention, and make people listen — and so are we."

The messages got tongues wagging at agencies via social media. Graf responded by posting a selfie taken above his message.

After one person at Grey received a campaign call-out claiming to be the platform's "favorite person" at the agency, Grey staffers then asked via social media if additional signs could be developed addressing their coworkers,  and Musicbed complied.

When Grey's Ryan Hallett joked that the company should also send him "vodka or a pony," Musicbed delivered both (the pony was stuffed).  Others that have responded via social media include 360i executive creative director Frank Cartagena and 72andSunny.

In addition, Musicbed hand-delivered the most recent volume of its in-house publication, Film + Music, and bought coffee for entire agency teams from local coffee shops.