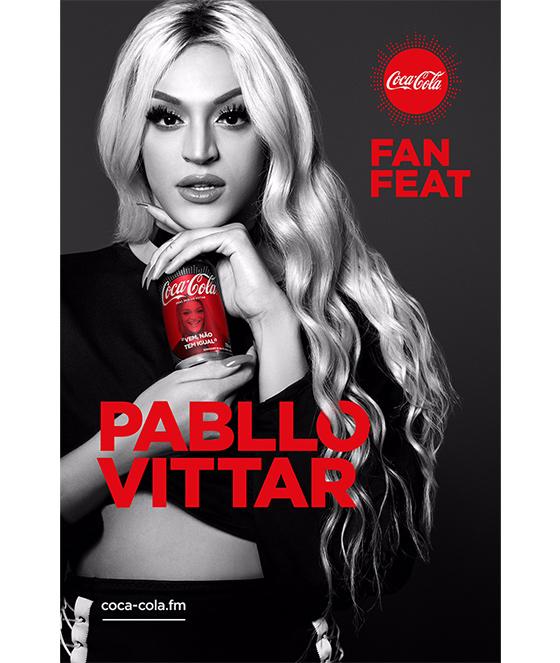 Coca-Cola, in partnership with creative agency J. Walter Thompson Brazil, has launched “Fan Feat,” a competition that exploits music as a passion point and involves Brazil’s top nine hit makers and artists, including Pabllo Vittar, Simone and Simaria, Luan Santana, among others.

Fans enter by submitting a photo of specially-branded cans that showcase one specific artist to www.cocacolafm.com.br. The system recognizes the artists and computes the votes. Then, the most voted trio will record an original song and music video, followed by a live concert starring all three artists at the end of the campaign.

The 100 fans that vote the most for each winning artist will receive two tickets to the concert and the 30 "most engaged" fans of each artist will win other prizes.

The campaign has exceeded expectations since its debut on December 26, and in fact, there are reports of individual rigging happening, according to an agency spokesperson.

People are hiding cans or making sure their favorite artists are the most easily grabbed cans on shelves. In one store in Rio de Janeiro, a restaurant owner scratched the faces of the artists from the cans provoking outrage that has spread virally across the Internet.

One artist, in particular, is proving to be controversial. Pabllo Vittar, a drag queen singer, is splitting opinions and irritating the conservative part of society. The internet in Brazil is full of fake news of Coca-Cola losing investors and firing people after losing a large amount of money, fake news that the biggest media players in Brazil are spontaneously verifying and denying, says the spokesperson.

On the other hand, fans and common people are showing their support to Pabllo and to gender equality. Internet is even creating memes making fun of supposed heterosexual men “afraid” of drinking Pabllo’s Coca-Cola and becoming gay.

Artists are much more engaged in the campaign than agency executives anticipated, resulting in a lot of "earned media" for Coca-Cola. "We hired 3 posts in social media from each artist, and some of them have already done more than 90 different posts about the competition," says Ricardo John, chief creative officer, JWT. "Even the most famous artists like Anitta are asking their fans to find their cans and vote."

Fandoms are also organizing its members to vote for their artists (what they call “mutirão”, when they schedule a time to concentrate their efforts to vote). Voting all together at the same time, they can see the results: the artist’s index rises in the ranking in real time. They are creating images and hashtags to summon up all fans to vote, and some of them are even organizing internal contests to reward the members who vote more with gifts.

"This campaign is different as it reflects the power of music united with a democratic idea," says Conrado Tourinho, senior integrated marketing manager, Coca-Cola. "We’re talking to a new generation that changed the musical scenario and the relationship between fans and artists, and we’ll give them a voice through our cans so they will finally manage to participate on their idols’ destinies.”