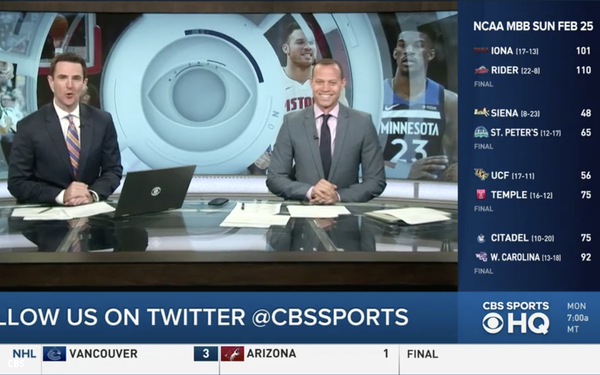 It's available inside the CBS Sports apps, and is embedded in CBSN and in the CBS All Access subscription streaming service. Anchors and contributors will include Jim Bowden, Jorge Andres and Dalen Cuff.

Notably, CBS Sports HQ will not include any live sporting events, instead leaving the live games to the CBS TV networks. While it will feature some opinion and commentary, the focus will be on news and analysis.

These are significant differentiators from ESPN’s upcoming streaming service ESPN Plus, which will feature hundreds of live games from various sports, as well as streams of ESPN's popular opinion shows.

CBS has quietly emerged as one of traditional TV’s most aggressive players in the OTT space. In addition to CBS Sports HQ and CBSN, the company has a subscription streaming service called CBS All Access, as well as a streaming Showtime subscription service. Later this year it will launch a free OTT entertainment news service based on the syndicated “Entertainment Tonight” brand.

“CBS to date we don’t think has gotten much credit for the success of its direct-to-consumer initiatives (it's certainly not reflected in its multiple),” wrote JPMorgan media analyst Alexia Quadrani in a research note last month. “With the rollout of CBS Sports HQ and a potential entertainment news service, combined with CBSN, the company will be positioned with a complete offering of free ad-supported digital news offerings which we believe will be unmatched.”

The company said on its last quarterly earnings call that it expects to invest significant resources into its streaming services, ordering new shows for CBS All Access while ramping up its live free networks.

“As with CBSN, which continues to attract a growing audience of digital consumers, we also think there’s a tremendous advantage in being first to market with this type of service in a crown jewel category,” said Jim Lanzone, CEO of CBS Interactive and chief digital officer for CBS Corporation, in a statement.