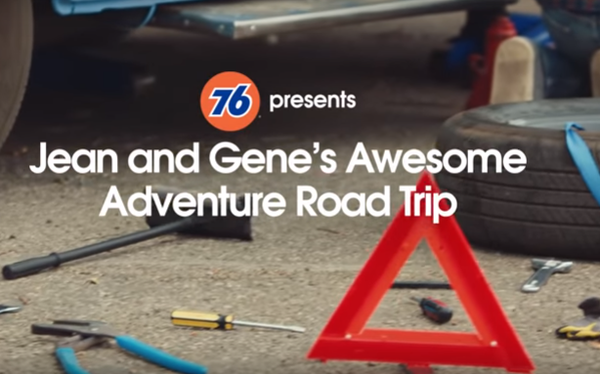 The  “Jean and Gene's Awesome Roadtrip” is designed to target younger consumers with a series of videos that build off the trend of #VanLife, the cultural/social dream to detach from all “things” and live out of a van.

The integrated campaign, the first from new AOR Carmichael Lynch, includes an array of online and offline channels, sponsorships and other components. CL won the business last year.

The documentary-style :15 and :30 second videos use improv actors to document their adventure in living this lifestyle, including initially purchasing the van during a late-night impulsive buy via the Internet and changing a tire.

The spots end with a shot of a 76 gas station along with the message, "We're on the driver's side."

Examples of the work can be seen here, here and here.

Professional actors, rather than real-life Van lifers, were selected for the campaign due to their abilities to bring a "slightly awkward relationship chemistry" while "sticking to a script," says Josh Leutz, group creative director, Carmichael Lynch.

The media approach is customized to reach 76’s more active/sophisticated/tech-savvy target through platforms like connected TV & OTT digital video, full-episode players, video-on-demand, and streaming audio. The highest recognition media partners include YouTube, Pandora and Google/Waze. The brand is also incorporating geo-location and consumer behavior data, especially through mobile efforts, to target consumers near stations and looking to fill up.

The work will be running in paid media in Los Angeles and Seattle, with a small amount of additional activity in Portland, Ore. In addition, the campaign is dedicating a significant portion of its L.A. presence to Hispanic targeting, including Broadcast, OOH and digital activity.

Beyond the paid media, a big part of the campaign's approach is local partnerships, says CL, including one with the L.A. Dodgers for TV, radio, OOH, and in-season promotions/giveaways, as well as Pac 12 Football, including the Pac 12 Championship, and, around Portland, University of Oregon & Oregon State Football, the Portland Timbers (Major League Soccer) and the Portland Thorns (National Women’s Soccer League). In L.A., 76 will sponsor the Street Food Cinema event series.

76 is partnering with editorial brands Lonely Planet and Roadtrippers to develop branded content. Also, it will distribute branded merchandise, such as t-shirts, patches and sticker sets in target markets.