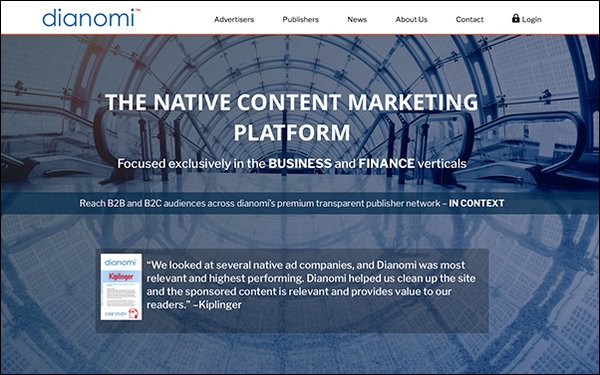 Dianomi, a native content marketing platform used by financial advertisers and tier one publishers, has secured $8.7 million (£6.3m) in capital investment from BGF, a funding company that mostly invests in small to medium-sized businesses in the UK and Ireland. The goal is to drive international expansion.

The company's technology matches premium sponsored content with relevant consumers across publications such as Reuters, MarketWatch, and MSN.

Rupert Hodson, Dianomi co-founder and chief executive officer, said the company is in the midst of testing a new ad "takeover unit" for brands looking for "more impact."

Mike Kelly, chief executive officer of Kelly Newman Ventures and former president of AOL platforms, will join the company's board. Kelly also is a non-executive director at QuantCast, Celtra and Americantowns. He also served as the former chairman of Unruly and former CEO of The Weather Channel.

Founded by Hodson, Raphael Queisser and Cabell de Marcellus, Dianomi will use the new funding to drive expansion in North America, Germany and the APAC, as well as increase its sales and data analyst teams.

The funding will help to build out services and increase the employee count in the UK to about 60%, about 30% in North America and 10% in APAC.  Tech will always be based in the United Kingdom, he said.

"We expect to grow 45% this year," Hodson said. In August 2017, he told Digital News Daily that the company's ads sit on close to 1 billion page impressions per month. When asked if the company's profitable, Hodson said "yes."

The profitability comes from focusing on serving banks and other financial services. It's a focus that Hodson believes helps Dianomi differentiate its business model from other native ad networks like Outbrain and Taboola.