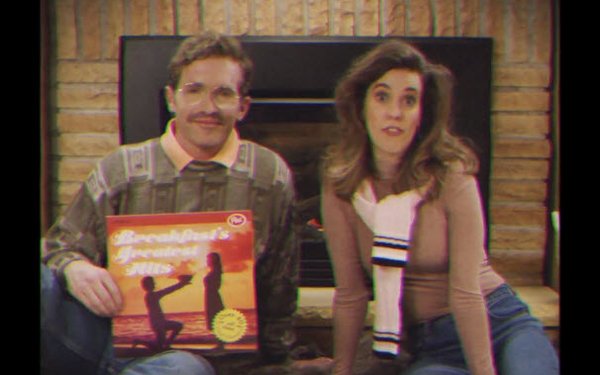 It’s National Cereal Day (had you forgotten?), and Post Consumer Brands is up to some good-natured tricks again.

The “ad” — which purports to be selling “Breakfast’s Greatest Hits” (on “2 LPs, 2 Cassettes or 1 Compact Disc) — features intentionally poor production quality, and stars an obnoxiously wholesome, smiley couple in front of a fireplace.

“Do you ever wish you could find all of your favorite breakfast hits in one place?,” asks the woman, breathlessly. “Now you can — over 40 breakfast hits by the original cereals, together in one collection!,” declares her partner. “It’s Breakfast’s Greatest Hits, from Post Cereals,” she enthuses. “Just listen…” he urges.

A string of faux, cereal-inspired song titles, accompanied by music snippets copying the styles and voices of real, blast-from-the-past bands and singers, then begins to scroll down the screen.

A Michael McDonald sound-alike sings “Now I’m picking up the Alpha Bits of my heart,” backed by instrumentation uncannily like that used in Doobie Brothers-era hits (though the band is ostensibly called “Alpha Bits”).

Vocals were contributed by Minneapolis musician Aby Wolf, as well as members of the agency team.

The kicker: an ending screenshot with an order phone number that declares “Call Now!,” but also has a smaller title reading “Not Available in Stores — Not Available AT ALL.”

The video, posted today on Post’s Facebook and Instagram accounts and its cereal brands’ individual social channels, is a follow-up to a successful video made for last year’s National Cereal Day.

That one, dubbed #cereALL Day, is a humorous rap video using Post and Malt-O-Meal flavors as lyrics, also from Public Works. It generated more than 2.9 million impressions, including some 595,000 video views and 3,000-plus shares — outperforming National Cereal Day efforts by General Mills and Kellogg’s combined on Facebook, Instagram and Twitter, boasts the agency’s website.