Ebiquity Is Most Used Adviser By Advertisers In Auditing Services Space 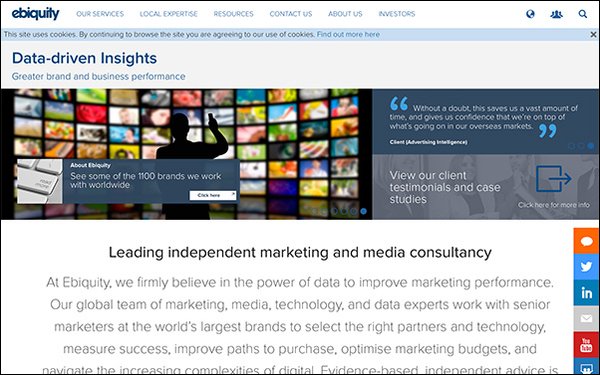 With mounting concern from advertisers about whether their media dollars are generating maximum return a new study from the World Federation of Advertisers finds  that clients are taking advantage of an expanding array of services on the media management front.

The study also found that most clients, agencies and advisers agree that current measurement approaches need to change. Nearly three-quarters or more of each group agree that “the industry needs to move away from outmoded media price judgments to focus on value-based assessments.”

The study is based on a survey that included 56 advertisers representing more than $90 billion in annual advertising and marketing spending. Major media agency groups and adviser companies were also polled. It found that many clients are already going beyond “classic” price auditing, which the WFA defines as comparing a price an advertiser pays with the prices paid by an anonymous pool of other advertisers.

Also, nearly all clients (96%) and most agencies and advisers agreed that digital media requires a different assessment methodology versus offline media. And though most advisers feel a lot of progress has been made in that area, clients were far more skeptical—less than a quarter of those polled agreed.

“There appears to be some frustration with the rigidity of the pool-based approach,” said Matt Green, Global Lead, Media & Digital, at the World Federation of Advertisers. “Attempts to create new forms of value-based assessment for digital are clearly not as successful and more work needs to be done to give advertisers reassurance that they are paying the right prices in a biddable media landscape.”

Programmatic evaluations are a main priority, identified by 86% of respondents as being “more important,” than other areas. Media analytics and consultancy-level services will also be more in demand, with technology selection and implementation being ‘more important’ for at least 60% of client respondents.

Eighty-one percent of advertiser respondents use auditing services routinely or permanently and 68% agree that auditing has been instrumental in reducing prices and extracting greater value from media, per the report. Seventy percent agree that “auditing is an “indispensable means of establishing an objective view of media value.”

Ebiquity is the most used adviser in this space, used by 58% of respondents, with Accenture Media Management used by 38%.

Seventy-five percent of respondents now use independent advisers for contract compliance auditing and verification. FirmDecisions (part of Ebiquity) and Ebiquity are used by 53% of respondents. Accenture are used by 19%.

Nearly 70% of advertisers have sought support for agency management and help ensuring that agency solutions satisfy their global requirements.  ID Comms is the most used adviser in this space, used by 23% of respondents with Ebiquity used by 21% and Accenture by 15%.

Fifty-nine percent of respondents have used independent advisers for media consulting, but this remains a relatively new area: 14% use their agencies/other suppliers for similar services, 20% do it in-house and 7% don’t do it at all.  Among those advertisers that have used a media consulting service most (61%) reportedly do it only “occasionally/sporadically.” And just 18% do so “routinely.” ID Comms is the most used adviser in this space at 17% of respondents followed by Ebiquity (11%) and Accenture (8%).

“Media management is a complex art and many multinational marketers use advisors to help them navigate a constantly changing ecosystem,” Green said. “The role that advisors play has become wider and more sophisticated as marketers seek to maximise the value of their media activity and align their external partners with their business goals.”