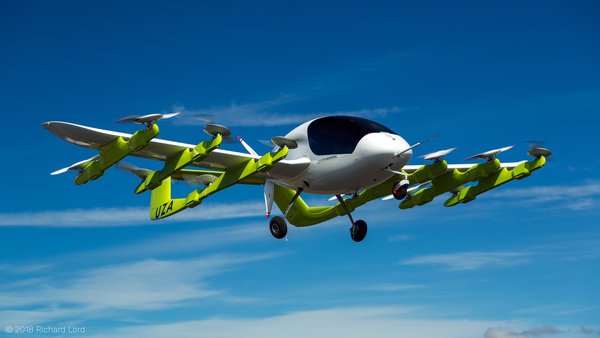 While automotive, ridesharing and technology companies work toward perfecting self-driving cars for one reason or another, a flying version of autonomous transportation backed by a Google co-founder was just introduced.

California-based Kitty Hawk is launching Cora, an electric-powered flying vehicle with 12 independent lift fans. The vehicle takes off and lands like a helicopter, and flies like a plane with a single propeller.

Since the vehicle is self-piloted, no pilot license is required, according to Eric Allison, vice president of engineering at Cora.

The aircraft is “a new type of personal transportation vehicle that will take you to the air," said Sebastian Thrun, CEO, Kitty Hawk, in a video announcement this week. He described the flying taxi program as “a global movement to re-think, to reimagine how all of us get around every day.”

Cora, the flying prototype, is designed for two passengers, has a wingspan of 36 feet and can fly about 62 miles at about 110 miles per hour. The company is backed by Larry Page, Google co-founder.

Cora has an experimental airworthiness certificate from New Zealand and the FAA, according to the company.

“We are so excited and proud to be working with the people and the government of New Zealand to roll out a commercial air taxi service,” said Fred Reid, CEO of Zephyr Airworks, the operator of Kitty Hawk in New Zealand. “We think this is the logical next step in the evolution of transportation.”

Cora will use self-flying software along with human oversight, much like self-driving cars ride with a person in the driver’s seat. The vehicles will not be for consumer sale and will function as a service like an airline or rideshare, according to the company.

No word on when people may be offered a ride in the air taxi.