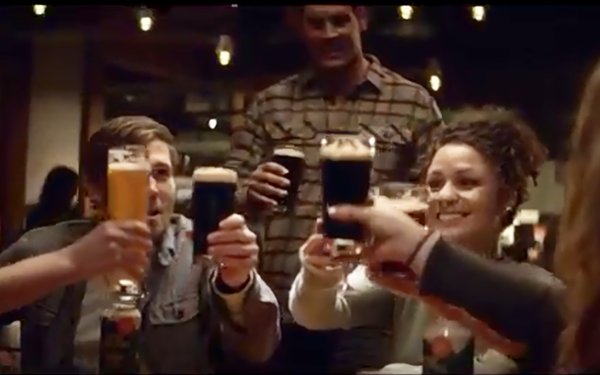 This campaign benefits from "amplified resources" thanks to the brewery's acquisition in 2016 by Anheuser-Busch.

Developed with VSA Partners, the creative supports the brand's Irish Nitro Stout by bypassing traditional beer ads that lean into brewing processes and ingredients to instead showcase the natural beauty behind the brewery's home state of Colorado. "From the flow of the river to the spray of the snow, the cinematography captures how the Nitro pour naturally complements the sights and sounds of Colorado," says an agency spokesperson.

The phrase “In Good CO” serves as a unifying thread across the campaign, "emphasizing Breckenridge’s deeply rooted belief in hospitality and camaraderie," says the spokesperson. In addition to two TV spots, the national campaign spans across OOH, digital, social and new packaging suites.

While the Brewery has been canning Nitro beer for several years, the campaign serves to formally introduce its newest Nitro Irish Stout, as well as its other nitro brews, including Nitro Pumpkin Spice Latte, and Nitro Vanilla Porter, among others.

Anheuser-Busch In Bev originally acquired Breckenridge two years ago as part of The High End, a premium craft brewery group. In order to maintain craft beer credibility, AB InBev helps these breweries expand their reach and following, but develops creative messaging around the individual brewery's personality, values and characteristics.