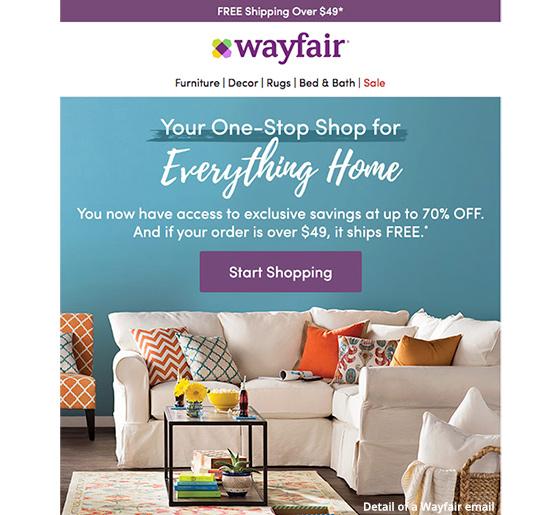 The undisputed champion of retail email is Wayfair, the home goods ecommerce firm. It is No. 1 in a new study by Coherent Path: How 100 Of The Top Retailers Engage Shoppers In the First 45 Days and Beyond.

Not that it has much competition: Many retailers are sending too many emails, failing to optimize them for mobile and falling short on personalization, partly because they are not making the best use of their data, according to Coherent Path.

Coherent Path studied every email sent by the top 100 retailers in the Internet Retailer top 500 list. It also purchased from every retailer.

Out of a possible high of 100, Wayfair scored 76.7 overall. Here is what it is doing right:

In contrast, TJ Maxx was in the basement with a score of 26.9. It deserves this lowly ranking because it:

Club Monaco fell from the top spot, sliding from 79.9 last year to 61.8, in part because of differences in methodology this time around. The previous study measured email to non-purchasers only, whereas this year’s study includes the Purchaser Experience category — an area in which Club Monaco did not excel.

So here are the top five. Three are online only.

Breaking it down, here are some of the contributing factors:

The analysis shows that most firms are treating purchases and non-purchasers the same way. Some send no emails at all except for order confirmations and shipping notifications.

But there are winners. The top five in this category are:

Next, Coherent Path conducted a Peer Comparison. Overall, J. Crew was No. 1.The listing:

This was based on these factors:

Email Frequency — The average number of emails sent by each retailer.

Coherent Path reports that “many retailers are slamming their customers.” But not all. The top five were:

The top two send an average of 0.96 emails a day, and restrict themselves to one message on those days 96% of the time. In contrast, “many retailers are slamming their customers,” sending more than one per day over a third of the time, Coherent Path reports.

Catalog Exposure: The amount of product categories exposed in each email

It takes an average of one year for the winners to expose their entire catalog. That’s not a long time: The overall average is three years. And the health & beauty retailers take 16.1 years, up from 9.4 years in the last study.

The study also found that 30% of the emails sent feature categories in the subject line, and that 25% contain subcategories.

The top five in this area are:

Email content: the optimization techniques used in each email

More than half of all subject lines fail to reflect the content of the email. Orvis scored the highest because it matched 85% of its subject lines to content, and designed 100% for mobile. Only 37% overall are optimized for mobile, but that’s up from 17% last year.

Another factor is use of discounts. Coherent Path found discount or promotional language in 39% of its emails, down from 43% the last time, with Health & Beauty firms scoring the highest here.