Facebook's Zuckerberg: If We Can't Protect Your Data, We Don't Deserve You 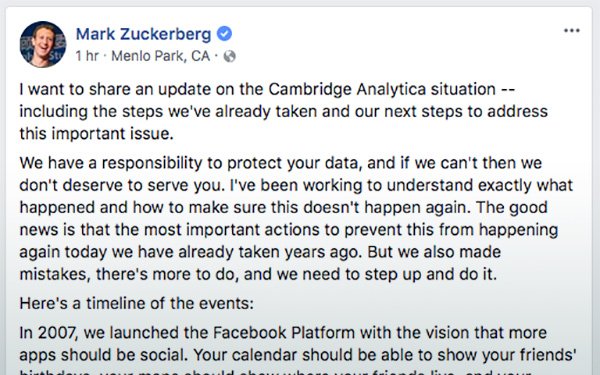 “We have a responsibility to protect your data, and if we can't then we don't deserve to serve you,” Facebook founder-CEO Mark Zuckerberg said in a post on Facebook responding to revelations about Cambridge Analytica’s breach of personal data of 50 million Facebook users.

“I've been working to understand exactly what happened and how to make sure this doesn't happen again,” Zuckerberg continued, making the first public statements since the press first began reporting the incident late last week, and the price of Facebook’s shares plummeted.

Zuckerberg asserted that Facebook already has taken “the most important actions to prevent this from happening again,” but he did not provide details about how the company would respond explicitly to the Cambridge Analytica news to assuage its users’ concerns.

He provided a timeline of the events surrounding Facebook’s dealings with Cambridge University and said it first learned of Cambridge Analytica’s use of Facebook user data in 2015 when journalists from The Guardian contacted the company.

He said the company assured Facebook that all the data was deleted, and that Cambridge Analytica provided “certifications.”

Zuckerberg said Facebook once again learned from The Guardian, and other media outlets, that Cambridge Analytica may not have deleted the data and that Facebook immediately “banned them from using any of our services.”

“This was a breach of trust,” Zuckerberg continued, adding: “We need to fix that.”