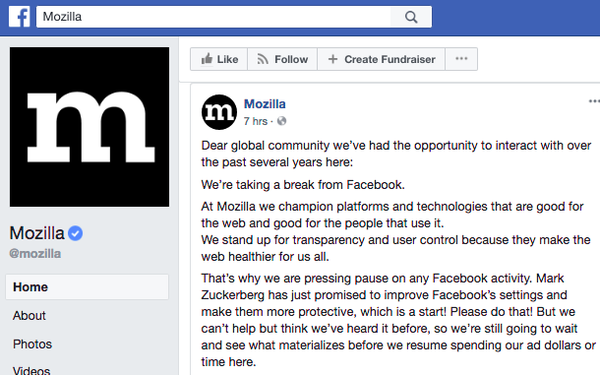 “Facebook knows a great deal about their 2 billion users, perhaps more intimate information than any other company does,” Mozilla said in its statement, adding, “They know everything we click and like on their site, and know who our closest friends and relationships are. Because of its scale, Facebook has become one of the most convenient platforms to reach an audience for all companies and developers, whether a multibillion corporation or a not-for-profit.”

Mozilla -- which markets Firefox, the third most distributed browser in the marketplace -- positions itself as being the best at giving users control and protecting their data.

The company acknowledged that Facebook has taken steps to deal with the breach, but added that recent news “caused us to take a closer look at Facebook’s current default privacy settings given that we support the platform with our advertising dollars. While we believe there is still more to learn, we found that its current default settings leave access open to a lot of data, particularly with respect to settings for third party apps.”

Mozilla said it plans to refrain from further advertising on Facebook -- and that when it “takes stronger action in how it shares customer data, specifically strengthening its default privacy settings for third party apps, we’ll consider returning.”