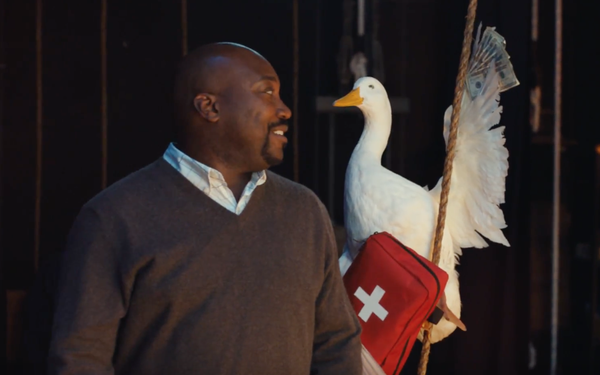 Aflac is launching a new spot featuring its famous duck. It’s the first work under the insurance company’s new chief brand and communications officer, Catherine Hernandez-Blades, who was promoted to the position in October.

In ”Not That Kind,” the Aflac Duck suddenly appears when he believes policyholders need help. The advertisement debuted March 22 during prime-time television, including the premiere of “Station 19” on ABC.

Developed in partnership with Publicis Seattle, “Not That Kind” shows how Aflac is there when you need it most, even if you really don’t.

“For nearly two decades, the Aflac Duck has been and remains the public face of Aflac’s commitment to people and community,” Hernandez-Blades said in a release. “This commercial demonstrates Aflac’s heart through the types of moments to which all of us can relate.”

“Not That Kind” opens with a father giving a pep talk to his daughter before her dance recital, encouraging her to “break a leg.” The Aflac Duck appears with cash to help cover costs resulting from a broken leg, to which the father responds, “Not that kind of break.”

The commercial continues with the dad and his friend playing video games. When one of the friends loses the game, his friend responds, “That had to hurt.” The Aflac Duck again appears with cash, and the policyholder responds, “Not that kind of hurt.” The commercial concludes with the dad laid up with a real broken leg talking about how Aflac’s One Day PayS program paid cash fast after his accident, helping him cover his car and mortgage payments when he was recovering and couldn’t work.