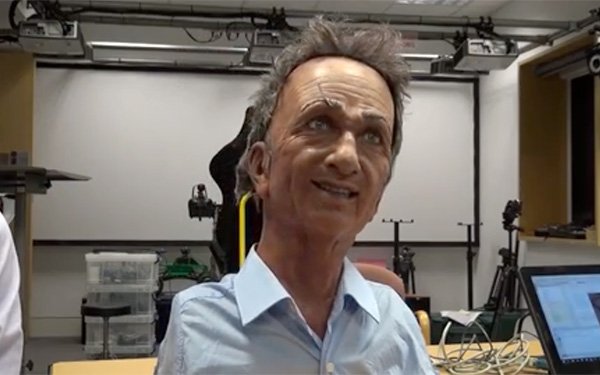 A robot named Charles that can mimic the facial expressions of humans has been created at Cambridge University.

Research by the Department of Computer Science and Technology is aiming to apply human body language to machines to determine whether people will better engage with them.

"We've been interested in seeing if we can give computers the ability to understand social signals, to understand facial expressions, tone of voice, body posture and gesture,” stated professor Peter Robinson in the university announcement of the project. "We thought it would also be interesting to see if the computer system, the machine, could actually exhibit those same characteristics, and see if people engage with it more because it is showing the sort of responses in its facial expressions that a person would show. So we had Charles made."

The somewhat strange-looking Charles -- or more accurately, the Charles face -- has wires coming out of the back of its head, connecting to little motors that attempt to mimic muscle movements in a human face.

“Our control programs are just not quite fine enough and the monitoring of the human face we're using at the moment is just not quite good enough, so it looks unnatural,” states Robinson. “Most people when they see this find it slightly strange and that's actually an indication that people are very good at seeing something wrong in somebody else's facial expression. It could be a sign that they're ill or something else."

However, Charles does appear to mimic the face of a human subject in a demonstration shown by the university. Now if they could just get Disney to fine-tune the animatronics.