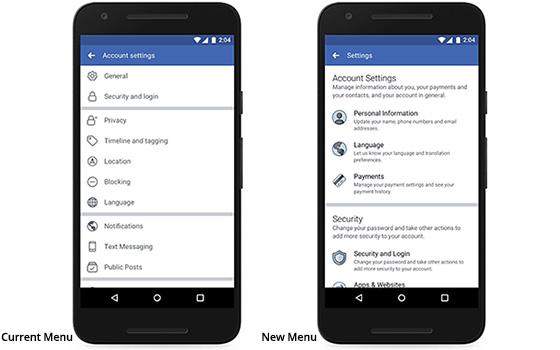 Doing damage control in the wake of the Cambridge Analytica scandal, Facebook is trying to give users more control over their personal data.

That includes a redesigned settings menu on mobile devices, so users should see fewer outdated settings and important settings lumped closely together.

A new Privacy Shortcuts menu has also been created. Users can control their data in a few taps, with clearer explanations of how Facebook’s controls actually work.

Among other controls, people can add more layers of protection to their accounts, like two-factor authentication.

It should also be simpler for users to review what they’ve shared in the past, then delete any content they no longer wish the world to see. People can more easily manage the information that Facebook uses to target them with ads, while an Ad Preferences page explains how this process works.

Additionally, a new “Access Your Information” section promises a secure way for people to access and manage their information, including posts, reactions, comments and search history.

“You can go here to delete anything from your timeline or profile that you no longer want on Facebook,” Erin Egan, vice president and Chief Privacy Officer of policy and Ashlie Beringer, vice president and deputy general counsel at Facebook, note in a new co-authored blog post.

Clearly on the defensive, Egan and Beringer admit they and their Facebook colleagues are playing catchup following the Cambridge Analytica controversy.

“Most of these updates have been in the works for some time, but the events of the past several days underscore their importance,” Egan and Beringer note. “Last week showed how much more work we need to do to enforce our policies and help people understand how Facebook works — and the choices they have over their data."

The new and redesigned tools are just one component of a broader response to user privacy issues, which Facebook CEO Mark Zuckerberg outlined last week.

Facebook has committed to investigating any apps that had access to large amounts of user data before 2014, when the company took measures to limit such access.

The social giant also plans to conduct a full audit of any apps exhibiting what Zuckerberg called “suspicious activity.” If and when Facebook finds developers misusing personally identifiable information, it promises to ban them, and promptly inform every user affected by their apps.

Zuckerberg also vowed to restrict developers’ data access even further to prevent other kinds of abuse. For example, Facebook will now remove developers’ access to user data after their apps go unused for three months. Facebook also plans to restrict the data people give apps when signing in to name, profile photo and email address.

The social network will now require developers not only to get approval but also sign a contract to ask users for access to their posts or other private data.