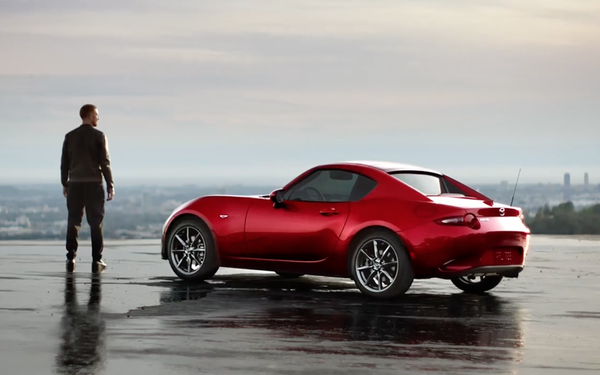 The 60-second brand anthem spot from The Garage / Team Mazda shows inspiring imagery of people of all ages and races finding their bliss by doing what they love. It urges viewers to “Flee that nest, realize, fulfill … run, don’t walk, be inspired, curious, be extraordinary.” At the end, after showing off several vehicles, the spot urges viewers to “turn off the highway and soar. Spread your wings.” It ends with both the voiceover and end frame of “Mazda. Feel Alive.” The brand’s longtime tagline, “Zoom-Zoom,” is not used.

The automaker states it is repositioning the brand for the future and making a commitment to fan-first experiences. The new direction comes after a six-month period of “intense consumer research and exploration” led by Chief Marketing Officer Dino Bernacchi.

The brand conducted 11 different research studies and spoke to more than 4,000 customers. The research looked at more than demographics, including behaviors, attitudes and cultural aspects to better define Mazda’s intended customer.

Bernacchi talked about his outlook for the Mazda brand at the Los Angeles auto show during one of his first interviews after coming to Mazda from Harley-Davidson in late November.

“I am an automotive enthusiast, I grew up in the Detroit area,” Bernacchi told Marketing Daily. “I traded four wheels for two and went to Harley and found there what it truly means to be customer-led because it was about nurturing the brand for the fans. And (Mazda) has such the same philosophical element of building vehicles, designing, engineering and sharing the vehicles with people who love to drive so that it truly enriches their lives.”

Mazda and its customers do not view vehicles as “commodities,” he says.

“It isn’t lip service, like it was not at Harley-Davidson, it was a real belief, it was a lifestyle, some call it a cult, but it was really being in unison with your fan base,” he says. “And that’s the other thing that I like to call our customers and I want to create more of, are fans, fans of this great brand, people who will buy into the brand and not just buy the brand. And deliver enriching experiences as enriching as our vehicles when they drive them.”

The brand campaign is a celebration of human challenge, inspiration, exhilaration and potential, he says. “Mazda has always engineered to a feeling,” Bernacchi says in a release revealing the campaign. “We want to build an emotional connection with our fans by making them feel something profound.”

The new brand platform will also pave the way for partnerships and integrations with companies such as Amazon, he says. The relationship is based on “a fresh approach to fan communities and leveraging Amazon as a social channel versus an e-commerce tool,” he says.

“Amazon is consumer-focused, data-driven and very well-aligned with our new brand platform,” Bernacchi says. “We have a vocal and growing community of Mazda fans and owners on Amazon and we want to support that community with the same energy and attention we give to our other social communities like Facebook and YouTube.”

Mazda is putting fans at the center of the brand starting with the new Mazda6. As the first shipment of newly refined 2018 models arrived at the Port of Tacoma in March, Mazda expedited delivery to a local dealership, offering fans in Seattle the first opportunity to drive, rate and review the new vehicle. The fans then were flown to New York as Mazda VIPs to experience the campaign launch alongside MNAO executives, dealers and employees.

The brand hosted a “Thank You, New York” event for local Mazda6 fans and owners last week ahead of the New York auto show. The celebration, co-hosted with Amazon, underscored the fact that more Mazda6 vehicles have been sold in New York than in any other city in the U.S.

During the media preview at the New York International Auto Show March 28, Mazda introduced its updated Mazda CX-3. Additionally, the Mazda Kai concept and Skyactiv-x engine made their North American auto show debuts, highlighting Mazda's design and engineering prowess as it moves toward its next-generation of vehicles.

The new CX-3's interior has been improved and now includes an electronic parking brake that frees up space and allows for a significant increase in storage space. Additional improvements include a smoother and more efficient engine, available full-leather seating surfaces, a quieter interior and redesigned seats.