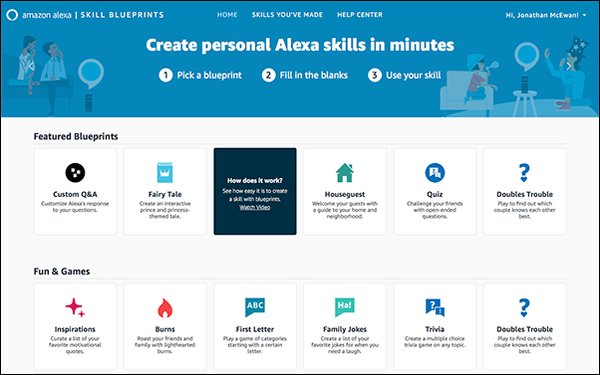 First it was the Amazon Echo smart speaker, so consumers could interact with Alexa, play music and use voice to execute skills, essentially triggering mobile apps without typing.

Then the Echo line was expanded to the Echo Dot, Echo Show, Echo Look and Echo Plus. Alexa also became integrated inside other devices, such as Fire TV Stick, Fire 8 Tablet, the HP Pavilion Compact Desktop Computer, the Sonos One Smart Speaker, the Ecobee Smart Light Switch and numerous others.

The most recent move for Alexa is for personal customization of skills, called Skill Blueprints. Blueprints lets Echo owners create their own personal Alexa experiences, at least within the boundaries of the templates Amazon provides.

I played around with Blueprints for a few days since the announcement and find them easy to create and execute. They come in the categories labeled Fun and Games, Learning and Knowledge, At Home and Storyteller.

The minor catch is that the owner has to remember the name of the skill created, much like they have to recall a bit of information when loading any other skill, such as “Alexa, ask Fidelity for the latest quote on Ford” or “Alexa, open Five-Minute Workout.”

With Blueprints, Echo owners have to recall the basic title of what they created, such as “Alexa, open Birthday Trivia” or “Alexa, open My Fairy Tale.”

There’s also a category called Custom Q&A that allows Echo owners to create just about any question and answer. This is one of the most fun, since the skill is entirely open-ended, with consumer questions and answers limited only by the creativity of the writer.

Text is entered into Blueprints and within a minute or two, it’s live on the Alexa tied to the account of the owner. “Who is the best dog in the world? It is Sherlock, of course,” could be created for a household with a dog named Sherlock. I didn’t test how sketchy questions could go, but I expect Amazon put some restraint on what’s allowed.

It will be interesting to see if this catches on in any significant way or if it turns out to be a novelty that eventually wears off.

Meanwhile, an Echo owner can put their own words into Alexa’s mouth in somewhat of a new version of artificial intelligence.