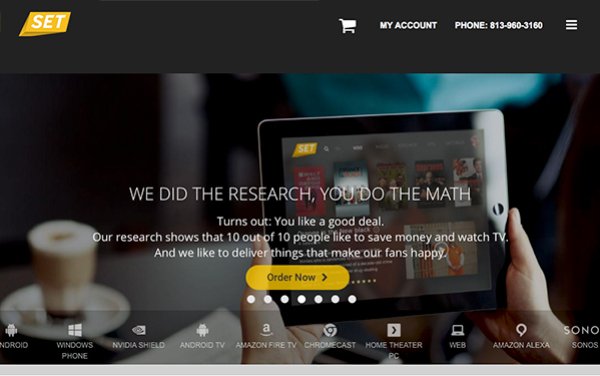 Set TV offers the $20-a-month online streaming service "Setvnow," which allows consumers to access a host of content, including movies that are currently in the theaters, according to the lawsuit.

Setvnow "provides hallmarks of using authorized streaming services -- a user-friendly interface and reliable access to popular content -- but with a notable exception: the customers only pay money to defendants, not to plaintiffs and other content creators," the studios allege in a complaint filed late last week in U.S. District Court for the Central District of California. "Customers renew their monthly subscriptions because Setvnow connects these customers to high-speed and high-quality streams of infringing content."

Among other allegations, the studios say that Set TV aimed to broaden its audience by paying for sponsored reviews on YouTube. One of those YouTube clips allegedly boasts that Setvnow offers "episode after episode of TV show after TV show," adding that people "can go and find the ones that you want and of course the newer releases.”

The content companies are seeking monetary damages and an injunction prohibiting Set TV from infringing copyright.

This lawsuit marks the third time in recent months that the major studios have joined with Amazon and Netflix in suing a company for allegedly inducing consumers to infringe copyright.

Last October, the content companies brought the first of the cases against manufacturer TickBox, which offered over-the-top devices that were powered by Kodi -- open-source software that enables people to play video. TickBox's devices also allegedly used add-ons that "scour the Internet for illegal sources of copyrighted content" and then display links to popular movies and TV shows.

Amazon, Netflix and the major studios also brought a similar lawsuit against Dragon Media, which is also pending before Fitzgerald. The content companies on Friday asked for Fitzgerald to hear their suit against Set TV, arguing that there is "substantial overlap" in the three cases.