Black Forest Creates Fanciful World With Its Own Customs 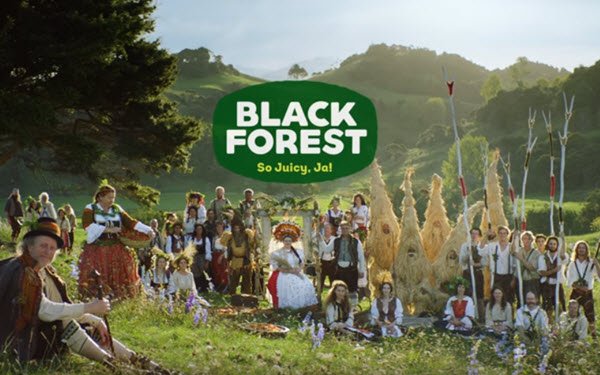 Gummies and fruit snacks brand Black Forest is making the most of its name in a new campaign that creates a fanciful, live-action, forest-based world.

The TV, digital and social campaign, “So Juicy, Ja!,” introduces “The People of the Black Forest” — a previously undiscovered, totally natural civilization with a culture based on harvesting gummies from trees. The natural angle ties in with the brand’s emphasis on the natural juices and other “real” ingredients used in its candies.

After they shake the gummies out of the trees (with straw-covered “bird scarers” safeguarding the crops), they engage in activities like crowning a “Juice Queen” and standing on mossy rocks.

“While the typical candy advertisement is usually too loud, brash and fast-paced, ‘So Juicy, Ja!’ provides a welcome relief, with a subtle approach full of nuanced detail and humor that creates a unique piece of entertainment on its own,” said Elena Sukacheva, CMO of Black Forest parent company Ferrara Candy Company.

"We wanted to create a whole, fully realized world of the Black Forest — one that’s full of things that could never truly happen, but grounded and treated in a very serious way, with reverence for its place and people,” adds Dave Canning, executive creative director at Joan Creative, the agency behind the campaign.

The campaign will also include a partnership with Lonely Planet, developed by creative media agency Noble People, and events throughout the summer.

In 2016, the brand ran a digital-only 3D CGI video campaign for the launch of its organic products that featured gummie bears starring in a slightly naughty “reality series,” “The Real Gummies of the Black Forest.”