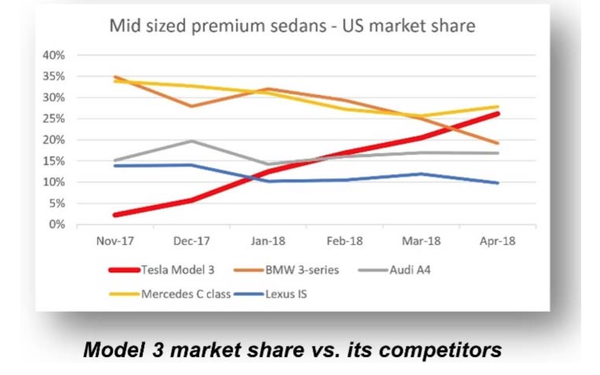 Tesla is making “significant progress” on the Model 3 ramp-up, according to a letter sent to shareholders Wednesday detailing the automaker’s first-quarter results.

The company’s automotive revenue in Q1 2018 increased by 19% over Q1 2017, mainly due to Model 3 deliveries and adoption of the new accounting standard described below. Tesla posted adjusted losses of $3.35 per share with revenues on $3.4 billion.

However, the questions swirling around Tesla go far beyond the automaker’s financials, says Karl Brauer, executive publisher for Autotrader and Kelley Blue Book.

"Several high-level executives have left in recent weeks, production of the Model 3 continues to lag Elon Musk’s claims, and competitive offerings from more established brands are fast approaching," Brauer says. "All of this sits on top of a rapid cash burn and questions of when Tesla will need a capital infusion. The financial numbers, or Musk’s spin on the financial numbers, will have to be pretty amazing to keep the stock heading in a positive direction.”

Prior to a planned shutdown in mid-April to further increase production, the company produced more than 2,000 Model 3 vehicles for three straight weeks, and hit 2,270 in the last of those weeks.

“Even at this stage of the ramp, Model 3 is already on the cusp of becoming the best-selling mid-sized premium sedan in the U.S., and our deliveries continue to increase,” according to the letter, co-written by Telsa Chairman and CEO Musk and Chief Financial Officer Deepak Ahuja. “Consumers have clearly shown that electric vehicles are simply more desirable when priced on par with their internal combustion engine competitors while offering better technology, performance and user experience.”

Musk was in “rare form” when confronting his critics but made it clear that the short-term focus of Tesla continues to be squarely on the Model 3, says Jessica Caldwell, executive director of industry analysis at Edmunds.

The company's future hinges on its ability to create a solid profit margin for the Model 3, and a major component of that is the successful ramp-up to its goal of 5,000 vehicles per week, she says.

“While it seems that Tesla has tackled some of its massive production hurdles, Elon still appears to hedge on whether this goal will be met by July,” Caldwell says. “The corporate restructuring he casually mentioned may be the monkey wrench that gets thrown into these plans, which can have serious ramifications on a company already plagued with high turnover."

Tesla seems to be finally getting some momentum, she says.

“Tesla showed signs of picking up steam in April, which bodes well for the company's prospects this year,” Caldwell says. “Elon hasn't always been a man of his word, but if things keep up at this pace, Tesla is on a better track to hit its Model 3 production commitment by July, which could be a blessing and a curse.”

Tesla will have to play a delicate production balance between Q2 and Q3 to hedge when it runs out of tax credits, and while Model 3 reservation holders aren't exactly known for being pragmatic, Tesla likely wants to keep the rebate carrot out there for as long as possible, she says.

The automaker opened nine new store and service locations during the first quarter, resulting in 339 locations worldwide at the end of the quarter.

“We continue to expand our service capacity mainly through growth of our electrified Mobile Service fleet,” according to the letter. “Such service capacity is quicker to deploy, incurs lower upfront and operating costs and has continued to generate significantly higher customer satisfaction rate at an average of 98%.”

There are about 300 mobile service vehicles in operation today, which is an equivalent of approximately 60 service locations. At the end of the first quarter, 25% of all service carried out in North America was done without customers having to visit a physical service center.

Nikola claims it was issued six design patents by the U.S. Patent and Trademark Office between February and April 2018 for its wrap windshield, mid-entry door, fuselage, fender, side cladding and the overall design of the Nikola One. The automaker estimates its harm from Tesla's infringement to be in excess of $2 billion, according to the filing.

Tesla rejected the claims. "It's patently obvious there is no merit to this lawsuit," a Tesla spokesman told Reuters in an email.