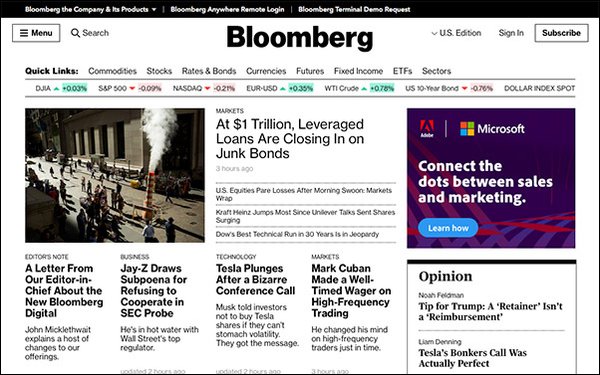 In late April, Bloomberg News floated the idea of introducing a paywall. Yesterday, in a memo to staff, the company unveiled the new subscription service.

For $39.99, readers can subscribe to the all-access pass, which includes the benefits of the digital subscription plus Bloomberg Businessweek magazine and access to exclusive BloombergLIVE events.

A paywall meter is set at 10 articles and 30 minutes of video per month, before the subscription services are required.

The memo also included information about the newly redesigned Bloomberg.com, which coincides with the launch of the paywall. The redesign was created with utility and mobile at the forefront. New digital features include a “text-to-audio” component making articles accessible to mobile users who want to multitask.

Additionally, readers have access to twice-daily newsletters serving regions across Asia, Europe and the America called The Bloomberg Open and The Bloomberg Close. The newsletters are curated by staff to offer readers analysis of the most important business news to their designated region.

The paywall, redesign and additional digital components follow a particularly strong period for the company. Since 2015, the company’s digital reach has grown by 85%, with 93 million monthly unique visitors counted across all digital content.

Justin Smith, CEO of Bloomberg Media Group, and John Micklethwait, editor-in-chief of Bloomberg, stated: “We owe much of this growth, which is increasingly global, to the quality and relevance of our data-driven business and financial content. While part of this audience expansion is due to the rise of major social-media platforms where our journalism is shared and featured, direct “on-platform” traffic to Bloomberg’s digital platforms has risen impressively by 30% over the last three years to 62.5 million visitors worldwide.”

They added the company had the highest traffic quarter on record at Bloomberg.com in March and the highest monthly traffic on its consumer app since launching in 2016.

Bloomberg’s video audience has also increased by 192% over the last three years and has raised the company’s visibility across social platforms, including Twitter, which the company used to launch TicToc by Bloomberg late last year.