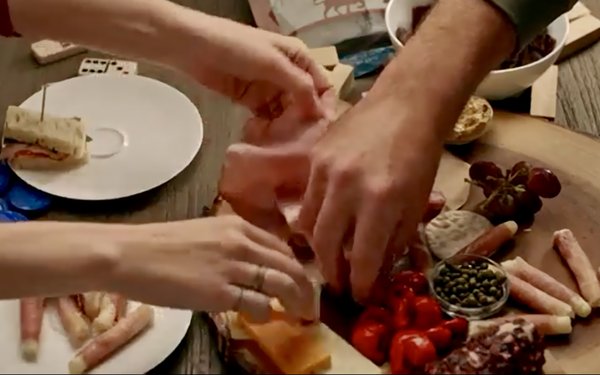 The "It's a Family Thing" campaign uses real-life couple actress and model Brooklyn Decker and her tennis star husband Andy Roddick to underscore the importance of family — a message that’s important to the family-owned and -operated brand for the past 80 years.

The “Game Night” creative features the couple devouring a meat-and-cheese plate while having an unexpected game night for two, before another couple notifies them that they are indeed coming over.

Another spot, the “Hama Lisa” shows Decker bragging about her perfect sandwich creation before she finds her husband Roddick eating it.

Notably, the spots don't overly emphasize the couple's personal relationship. While they refer to one another via their first names, only in-the-know viewers will realize they are a real-life married couple. There are also insider-only references to their professional lives. For instance, while Decker is seen beating Roddick in a tennis videogame, there are no overt messages to signal to the viewer that he is a former professional tennis player.

These spots will run nationally in 20 U.S. markets including Philadelphia, Boston, Chicago, and Washington, D.C.

A third spot featuring the couple will air later this year.