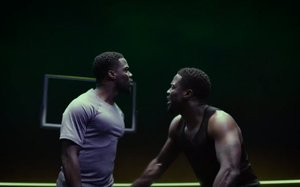 Mtn Dew Kickstart is out with its first TV ads starring comedian and actor Kevin Hart.

Hart launched a year-long deal as the brand’s spokesperson with an NBA-themed contest that ran in February.

The TV ads are part of a multi-channel campaign, from BBDO Worldwide, dubbed “Give Your Head a Mtn Dew Kickstart,” that also includes digital and social elements.

The three 15-second TV spots take fans inside Hart’s head to experience what he’s thinking as he “pumps up” by drinking a Mtn Dew Kickstart — the popular brand spin-off that contains original Mountain Dew, 5% juice, and a shot of caffeine.

In "Slap," which debuted this past weekend during the NBA Playoffs, Hart faces his (digitally created) doppelgänger on a basketball court (above). In "Chopper," Hart cavorts on a super-powered, neon-green motorcycle.

In the third spot (below), Hart plays a psyched-up wrestler being interviewed by WWE Hall of Famer 'Mean' Gene Okerlund.