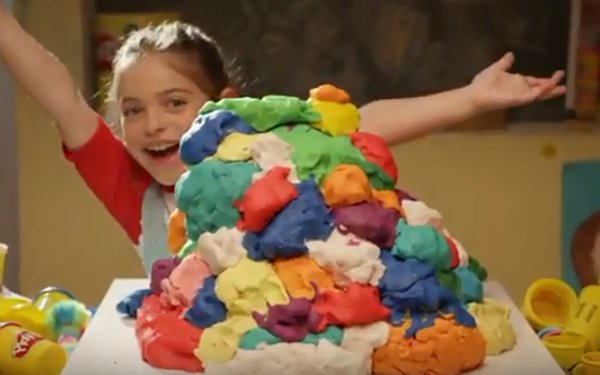 As you may have read, Christie’s auction house today is auctioning Jeff Koons’ decades-in-the-making sculpture “Play-Doh,” a 10-by-12-foot installation that looks like a multicolored mound of the dough-like substance of the same name that’s marketed by Hasbro as a craft-hobby toy.

You can get an eight-pack of Play-Doh for under $5. The Koons sculpture—which is made out of interlocking pieces of aluminum—is expected to fetch close to a reported $20 million.

Hasbro is now cashing in on the hoopla surrounding the Christie's auction with a fun campaign from agency Uproar! (with DDB serving as creative consultant). It tells the story of a young influencer name Kristie who, inspired by seeing the Koons sculpture, decided she was going to make a sculpture, too.

But hers is made out of real Play-Doh, which Hasbro donated to the cause.

Kristie’s work is pretty sizeable as well, though not quite as big as the Koons' work. She, too, is going to auction off her Play-Doh sculpture, on eBay. (She’s dubbed it the “Super Awesome Auction.”) Profits from Kristie’s sculpture will go to the nonprofit organization Give Kids the World.