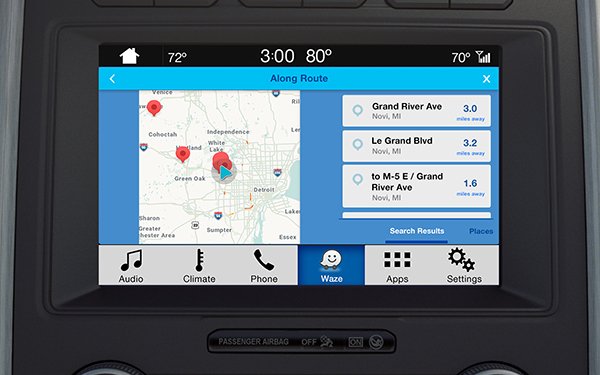 While autonomous or self-driving cars get plenty of attention, it’s the increasing connectedness of cars that consumers will experience first.

New cars can come with sensors that detect when the car crosses a line drifting into another lane, sensors that cause the car to brake if a person or object unexpectedly crosses its path, or in-car connectivity allowing hands-free phone calls through the car’s sound system.

One of the most useful features of a connected car is the ability to get directions, whether through an in-car navigation system or turn-by-turn directions via Google Maps connected to the car’s sound system via Bluetooth.

The problem with phone-based directions is that despite the voice directions, to see the map of where someone is heading requires looking at a relatively small phone screen while driving.

Ford is now tackling that issue head-on. The automaker just announced a partnership with Waze, the crowdsourced mapping company.

Once connected to Ford Sync AppLink, an iPhone with the Waze app can project its mapping onto the vehicle’s touchscreen with the driver able to find efficient traffic routes, cheaper fuel prices and report and see traffic accident locations.

The app can be controlled by voice and voice direction that come through the sound system in Sync 3-equipped Fords.

One slight irony is that the Waze-Ford deal works only on Apple devices, and Waze has been owned by Google since back in 2013.

This is just an indicator of what is coming in connected cars. Features from smartphones, still the most connected device of all, will be more tightly integrated with the increasing number and size of screens in cars.

The connected car ultimately will be as connected as the smartphone, creating a new meaning of mobile computing.