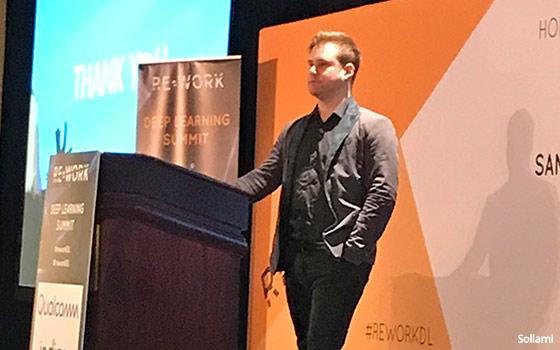 One thing about the Internet of Things is that there’s a lot going on behind the scenes.

To get a flavor of some of the behind-the-scenes IoT activities, I spent some time at two different conferences held in Boston this week, one dealing with robotics and the other with artificial intelligence.

Each of the two unrelated events, the 2018 Robotics Summit and Showcase and the Rework Deep Learning Summit, had several hundred attendees.

The content at the two events could not have been any more different from each other.

At the robotics summit, Adrian Kumar, vice president solutions design North America at DHL, discussed and showed how robots are being tested to roam massive warehouses and pick items off shelves, place them in carts and then move on to the next zone.

At the Deep Learning Summit, Google Brain software engineers Nikhil Thorat and Daniel Smilkov, presented new models for deep learning and how to create models in a web browser.

Presenters and exhibitors at the robotics conference described and showed the hardware elements, both small and large, that will comprise the automated moving things of the future.

Presenters and exhibitors at the deep learning event described and showed how machines are working behind the scenes, but in these cases, through highly complex software. For example, Sergul Aydore, machine learning scientist at Amazon, detailed the neural network formulas created so Amazon can precisely forecast demand for all its products.

From a physical standpoint, the number of robots and robotic things will dramatically increase over time. In many cases, consumers will be able to witness what these robotic things do.

Many aspects of machine-learning AI may be a different story.

In a presentation on Computational Photography (CP) with deep learning, Michael Sollami, lead data scientist at Salesforce, showed how photos can be perfected, even from an original that’s not that great.

More significantly, the same and more can be done with video in terms of making them photorealistic.

Sollami said that the capabilities are coming to create a video that no one can tell the difference between the original and a total fake – by the end of this year.