Only A Third Of Consumers Opting In To GDPR Compliance 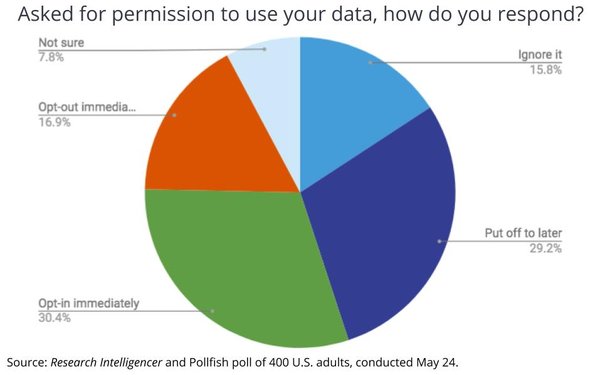 Nearly two-thirds of Americans contacted on the eve of today’s deadline to comply with Europe’s new data privacy rules say they have either ignored, opted out immediately or put their consent off until later, according to a survey conducted late Thursday by Research Intelligencer and Pollfish.

Only 30.4% of the respondents said they agreed to those requests immediately.

While the new rules -- the EU’s so-called GDRP, or General Data Protection Regulation -- theoretically affects only European citizens, U.S.-based brands, media companies and platforms have been rushing to get permission from users in preparation for today’s deadline, because of the potential liability of inadvertently violating the rights of EU citizens in the U.S.

The findings are self-reported, but are closely aligned with the findings of a survey of media buyers and planners at leading agencies released late Thursday by contextual targeting platform Vibrant, indicating that they believe 43% of consumer targeting data would be made “unusable” by GDPR compliance.

Whatever the outcome, U.S.-based companies have been rushing to get consumer compliance. Sixty percent of consumers responding to the Research Intelligencer and Pollfish survey said they were contacted in the past 24 hours, and 22% in the past hour.

Interestingly, most American consumers said they had never heard of the GDPR rules, but an overwhelming majority (81%) said they felt the U.S. should pass regulations protecting their right to control how others use their personal data. 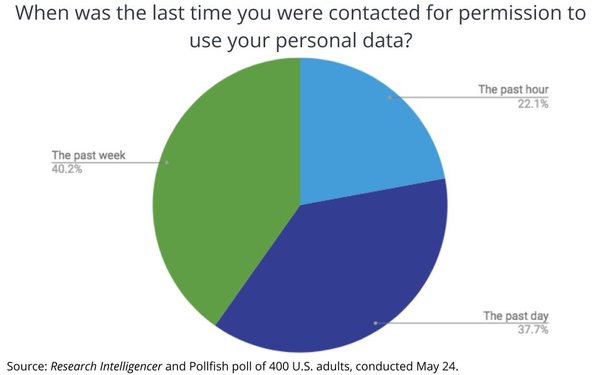