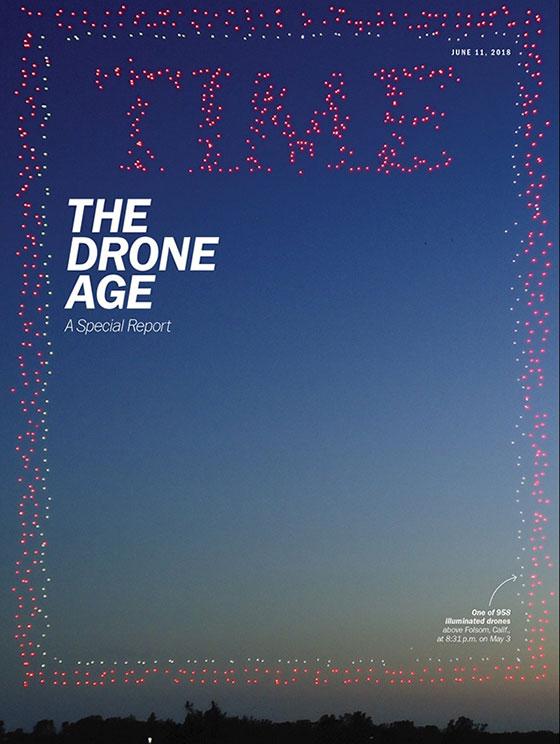 Intel’s drones have now flown in California to recreate the cover of “Time” magazine in the sky.

The cover was made using 958 Intel Shooting Star drones, all controlled from one computer. The drone cover was captured by yet another drone, one specialized for commercial and film cinematography, which recorded the event from start to finish.

Intel’s drones are increasingly used for marketing and entertainment at high-impact events.

For example, they have been used for a 300-drone light show at Disney World in Orlando in place of fireworks.

At the opening of the Olympics, Intel used more than 1,200 Shooting Star drones that also set a Guinness World Record for the most unmanned aerial vehicles airborne simultaneously. That surpassed the 500 drones flown simultaneously in Germany in 2016 and the 300-drone show that closed the recent Olympics.

The drones each weigh three quarters of a pound or slightly more than a volleyball and are custom-made for entertainment. Their LED lights can create more than 4 billion color combinations and be programmed for animation.

Intel created an algorithm to automate the animation creation process by using a reference image, then calculating how many drones are needed, along with where to place them for the fastest path to the image creation in the sky.

The Time drone cover was created to highlight a special report in the Meredith-owned magazine. The special report included drone stories on aerial photography, no-drone zones, endangered whales and life at the U.S.- Mexico border.