Has The Trump Bump Turned Into A News Slump? 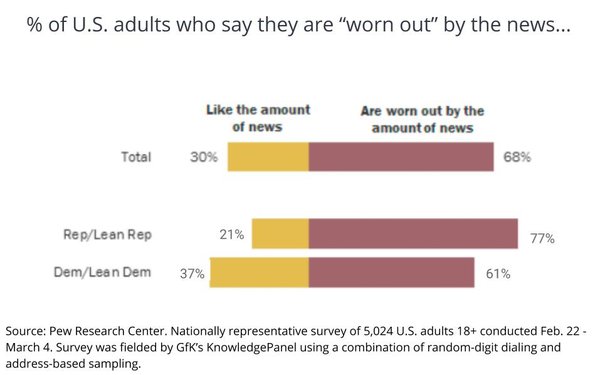 Sometimes the media universe works just like the physical universe, especially where the laws of gravity are concerned. You know -- what goes up must also come down. After 500-plus days of a news consumption high, it looks like Americans are just plain worn out. Especially the Republican kind.

According to findings of a nationwide study conducted by the Pew Research Center, more than two-thirds (68%) of U.S. adults report they are “worn out” by the amount of news coverage.

Interestingly, the study finds Republicans report being dramatically more worn out (77%) vs. Democrats (61%).

“This elevated fatigue among Republicans tracks with them having less enthusiasm than Democrats for the 2018 elections,” according to Pew analysts Jeffrey Gottfried and Michael Barthel, who co-authored the report.

While they don’t opine on why Republicans are less enthusiastic about politics and feeling more fatigued about the volume of news coverage, the research could be an important harbinger for American news organizations that have been benefitting from the Trump Bump.

Earlier this week, my colleague Wayne Friedman reported on a “slow down” in cable news viewing in May. Wayne attributed that in part to counter-programming -- the NBA playoffs and finals.

But the Pew findings suggest it might be more a function of human nature: people becoming inured by the incessant droning state of a never-ending up-and-down news cycle that sometimes seems more like a scripted reality TV show than the normal ebbs and flows of national affairs.

In fact, the Pew study suggests that TV may be poised to lose an important incremental factor that has contributed to recent ratings highs: light viewers.

Demographically, men and older folks report less fatigue than the average news consumer, but white Americans are dramatically more burned out than blacks and Hispanics.