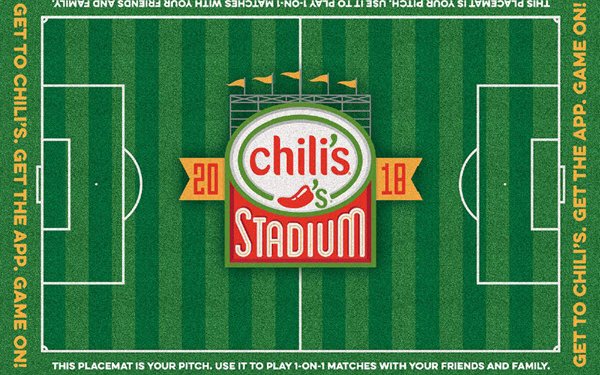 Eight O’Clock is encouraging consumers to play a digital escape-room game for the chance to win a year of free groceries … in the form of a check for $8,000.

The “Great Coffee Break” game is the first AR-triggered digital game designed by Escape the Room, according to the brand.

It can be launched by scanning any Eight O’Clock Coffee package with the Shazam app, or going directly to GreatCoffeeBreak.com.

Players explore virtual rooms within a virtual roastery to find clues, solve puzzles, and complete the mission of helping bags of Eight O’Clock “escape the roastery.”

The sweepstakes game, conceived and executed by The S3 Agency (Booton, N.J.), will run from June 17 through August 11.

Meanwhile, Chili’s is looking to bring in and engage consumers around the world (it’s 1,600 locations span 33 countries) during World Cup mania with a “Chili’s Stadium” game offering one-on-one competitive play in a series of soccer matches.

The game — one of the first iOS-Android cross-platform, multi-layer games available in AR, according to the casual restaurant brand — is a mobile app developed by Dallas-based creative agencies MindHandle and Post Asylum/Element X, downloadable at the Apple and Google Play stores.

All customers will receive a special placement (above) that serves as the game tracker and brings players to life in AR.

Players can create personalized avatars and take photos with them in selfie mode. Player 1 uses “create match” to generate a unique QR code used to link both players’ phones together. Player 2 joins the match by holding his or her phone screen over the QR code. Play is enhanced with the use of power-ups and badges.

The app will also release new features each Thursday, starting June 21 and ending in late July.