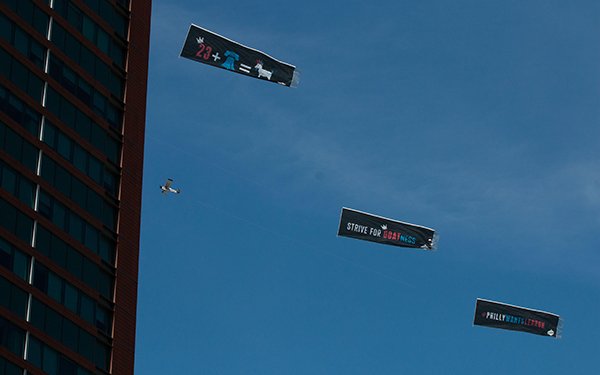 Philadelphia-based Power Home Remodeling is taking its viral #PhillyWantsLeBron campaign to the next level (so to speak) by flying three billboards in formation over the skies of New York City in the hours leading up to the NBA Draft Thursday evening at Brooklyn, New York’s Barclay’s Center.

The effort is the latest in the company’s campaign to get basketball great LeBron James to sign with the Philadelphia 76s now that his contract is up with the Cleveland Cavaliers (which were swept in this year’s NBA finals by the Golden State Warriors).

The campaign’s first phase kicked off in February with company’s “Three Billboards in Cleveland, Ohio” effort, urging James to sign with the Sixers. It generated a small fortune in earned media with, according to the company, a total of 2.5 billion impressions.

The company is working with Philadelphia and Boston-based agency Allen & Gerritsen on the campaign. (Especially the Philly office, no help from Boston needed, particularly after this season).

While there is some debate about whether James is the Greatest of All Time (GOAT) NBA player, the flying billboards encourage him to “Strive for GOAT-ness” by joining the Philadelphia 76ers, which some pundits (and fans) believed had a shot at this year’s title (wasn’t to be).